Tonight's episode of The Flash "Killer Frost", directed by Kevin Smith, promises to be a big one!

The Flash Season 3 Episode 7 starts off with Barry being pushed into the ceiling by SAVITAR! OH NO!

The Flash is yelling to Joe, SHOOT HIM! But Joe can't see him. Just then Savitar says, "LET'S GO FOR A RUN!" He grabs onto Barry and takes off into the night.

Back at STAR LABS, they notice that Barry is appearing and re-appearing all over the city at once. Holy HECK. Savitar is FAST! He is moving faster than anything EVER!

Cisco can not track the invisible force because he is too fast.

Savitar towers over Barry at the waterfront, when Caitlyn shows up with Cisco as Vibe through a portal. She uses her freezy cold powers to save Barry.

Back at STAR Labs, Cisco has never done an interndimensional breach before as Vibe, has basically had a mini stroke, and is suffering from a horrible headache.

The Flash thanks Caitlyn for saving his life, she walks away and her eyes light up BRIGHT WHITE!

Team Flash determines that Dr. Alchemy is just a pawn for Savitar because he claimed to be a god.

Wally is currently stuck inside of some sort of crystal or rock cocoon aftering being attacked by Dr. Alchemy. Joe is very upset and the team is trying to figure out how to help Wally.

Once again, Barry takes the blame on himself because he feels responsible for changing the timeline.

Joe heads back to the police station to interrogate one of the robed men who was kneeling to Dr. Alchemy. He grabs the mans nose and starts yelling that he will tell him how to save his son OR ELSE!

Caitlyn lies to Joe to get him out of the room by saying Wally is cured and tells him to go back to STAR LABS.

She turns into KILLER FROST and asks the robed man, "Where is Alchemy!?"

The robed man tells Killer Frost that the only one he fears is the Dark Lord Savitar. She uses her breath to freeze the entire room and escape - UNTIL JULIAN SPOTS HER!

"I need you to come with me," Killer Frost says to Julian as she holds out a menancing hand.

Team Flash heads to the station as soon as Joe realizes Caitlyn was lying about Wally. The cops tell Barry about the attack on the precinct and that Julian has been taken hostage.

Killer Frost asks Julian to create an algorithym so she can find Dr. Alchemy or Savitar.

Back at STAR Labs, Team Flash is trying to find Caitlyn, as they realize she is turning into Killer Frost.

Hipster Wells asks how they caught Captain Cold and suggests they try the same thing to find Caitlyn. For once, hipster Wells is helpful!

Back at the cold storage warehouse, Julian found two people that have searched for Savitar, both from Central City.

Julian hacks his way through the laptop and discloses his location. The Flash shows up to try and stop Caitlyn from hurting anyone, including herself.

He asks her to stop, but she yells, "I have to find Savitar so he can help me stop my powers!"

"Caitlyn, I don't think that's how this works!" Barry says.

"You keep messing with everyone's lives.." She goes on to reveal to Cisco that Barry is the reason that his brother Dante is dead. She is cruel, mean, and not herself.

Killer Frost stakes Barry with a weaponized icicle and says, "Do NOT follow me!"

Back at STAR Labs, Barry is in bad shape. He talkes to Cisco and says that Caitlyn wasn't lying and his brother was alive until Barry created Flashpoint.

"I don't even know how to feel right now, all I know is Caitlyn is out there and we need to find her." Cisco cries as tears stream down his face.

They figure out the addresses of Dr. Alchemy's supporters and Joe, Cisco, and Hipster Wells set up a stake out.

Wells tells Joe that Barry's strongest superpower is not speed, but hope. They are sitting there waiting outside one of the homes.

Back at STAR Labs, the satellite to detect temperature changes goes off! Alerting the team that Caitlyn is at the house Cisco is watching.

She corners one of Alchemy's followers and forces him to tell her everything.

He says, Dr. Alchemy can not take away powers, and they both serve the Dark Lord Savitar.

"Savitar has great plans for you Caitlyn Snow...or should I say Killer Frost!" he says.

He claims to have seen the future and that Killer Frost is glorious.

Cisco yells for her and she meets him outside. He tells her that her name is Caitlyn snow as she shoots icicles at him, trying to hurt him. He runs behind some trees to save himself from her wrath.

Barry shows up and Caitlyn starts to freeze him to death!

She is blowing cold air into his mouth, but Cisco Vibes and saves Barry's life. He tells him to start vibrating to warm up.

Back at STAR Labs, the entire team has Caitlyn locked up in a cell. She is so mean, saying that Barry broke everything around him.

"If you guys let me go I will leave you to your sad and miserable lives," she claims.

Barry asks Cisco if there is a way to get her back and he says, "Sometimes when things get broken, they can't be fixed." Tears.

Barry and Iris step aside, while Barry talks about how everyone is fighting each other instead of trying to find Savitar. Iris tells him that he is not god, and he can't keep blaming himself, because everyone needs The Flash right now.

"I know you don't know how to be a hero right now, but you have to be," Iris tells him.

Upstairs a heat energy is coming from Wally's cocoon. He breaks out with an immense explosion.

HE HAS SPEEDSTER POWERS! Wally instantly runs out of the room, leaving Team Flash in complete shock.

Everyone is worried about Wally. Barry has to talk to Caitlyn and ask for her help because Wally's bio-chemistry is all out of whack.

Wally is not himself and could be halfway around the country right now.

Barry opens the cell and let's Caitlyn go. "For a smart guy, that was a dumb move," she says.

Barry challenges her and says if she wants to leave the room, she has to kill him first.

He pushes her, and pushes her to kill him, saying that she can't do it because underneath all of that cold she is still herself.

She breaks out of Killer Frost mode, cries, and hugs Barry.

Back at STAR Labs, Caitlyn explains that Wally's mind and body are vibrating at different speeds, so she has made a serum to match them up.

Joe finds Wally at the house he grew up in, while The Flash sneak attacks and shoots the serum into his neck. Wally falls into Joe's open arms.

The next morning, Wally is testing his speed at the lab.

Team Arrow is hugging and crying tears of joy, until the phone rings. It's the hospital - Julian has finally woken up after being attacked by Killer Frost.

Barry approaches Cisco and tells him he's his best friend and asks if they are going to be OK.

Cisco replies with, "I don't know."

At the hospital Barry gets to Julian right before he is about to give his statement to the police.

He tells Barry that he knows about Caitlyn and that she is an evil metahuman who is a bloody menance.

Barry explains that Caitlyn is a good person, but that she is sick, and please don't turn her in. He agrees. Julian says there is one thing he can do and tells Barry Allen to quit his job and resign immediately.

Julius tells Barry, "You are unfit to be CSI. Barry Allen has no place in the police department."

Barry agrees and walks out. Julian covers for Caitlyn.

Back at the police department, Barry is in his office packing up his boxes. Joe figures out the deal he made with Julian. Iris tells Barry that he can't leave, the lab is his life.

Barry says, "If these past few months have taught me anything, it's that I would give up everything I have as long as I still have my friends," AWWWW.

AGH! Savitar is now talking to Julian. He starts running through the halls of the hospital.

Savitar stops Julian outside and says, "Only together can we come back...Become Alchemy!"

Back at the CSI lab, Julian opens a drawer in a filing cabinet and pulls out...

THE MASK OF DR. ALCHEMY! 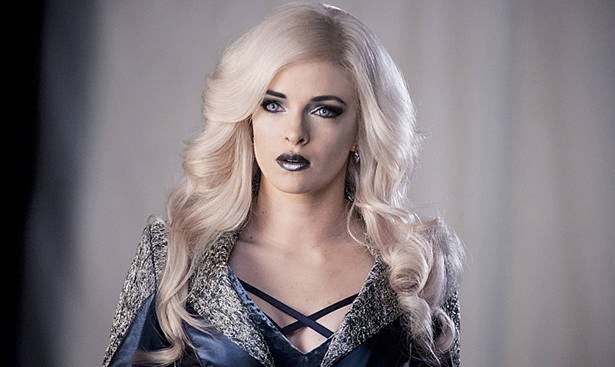 The Batman: “Not Robert” Trends After Robert Pattinson Tests Positive For COVID-19

The Batman Has Not Resumed Production, Cast and Crew Quarantined (Update)