During pre-production, Trixter concept artist Paolo Giandoso -- who helped visualize Scarlet Witch and Quicksilver's superpowers for Captain America: The Winter Soldier and Avengers: Age of Ultron -- was tasked by the visual effects company to storyboard, color-script, and art direct a test shot for Marvel Studios' Ant-Man. The test shot went over so well that, later on during production, Trixter was asked to make a pitch for Pym Cross Technologies' Yellowjacket sizzle reel. Once again, Trixter turned to Giandoso storyboad the sequence that happens right after Darren Cross unveils the suit to Hank Pym, who is horrified and now motivate to stop his former protégé, and prospective investors/buyers.

How did you begin working on the Yellowjacket sizzle reel?

Paolo Giandoso: We pitched an idea for this sequence to Marvel together with other companies. I was the only concept artist working for Trixter on the pitch; I was given the base story-beats, a couple of reference images and full freedom of expression for a week. It felt like being a kid in a candy store. I prepared concept artwork and storyboards that were then edited together in a 2D animatic with motion graphics and voice acting. The pitch was successful and Marvel awarded the sequence to Trixter Film.

The next evolution of the Marvel Cinematic Universe brings a founding member of The Avengers to the big screen for the first time with Marvel Studios' Ant-Man. Armed with the astonishing ability to shrink in scale but increase in strength, master thief Scott Lang (Paul Rudd) must embrace his inner-hero and help his mentor, Doctor Hank Pym (Michael Douglas), protect the secret behind his spectacular Ant-Man suit from a new generation of towering threats. Against seemingly insurmountable obstacles, Pym and Lang must plan and pull off a heist that will save the world.

Ant-Man earned $180.2M domestically and $339.1M internationally for a global total of $519.3M. It was directed by Peyton Reed. The story was conceived by Edgar Wright and Joe Cornish, and the screenplay was written by Adam McKay and Paul Rudd.

What was your first involvement with Ant-Man?

Paolo Giandoso: The first work I did related to the Ant-Man project was early on when Edgar Wright was still at the direction of the movie. I storyboarded and provided art direction for a test shot Trixter Film did to show Marvel that the company was suitable for working on the movie. Test shots like these are a common procedure and, at the same time, extremely cool because there is a lot of freedom in what to show. The test shot was very well received and it allowed us to jump on the project later on. 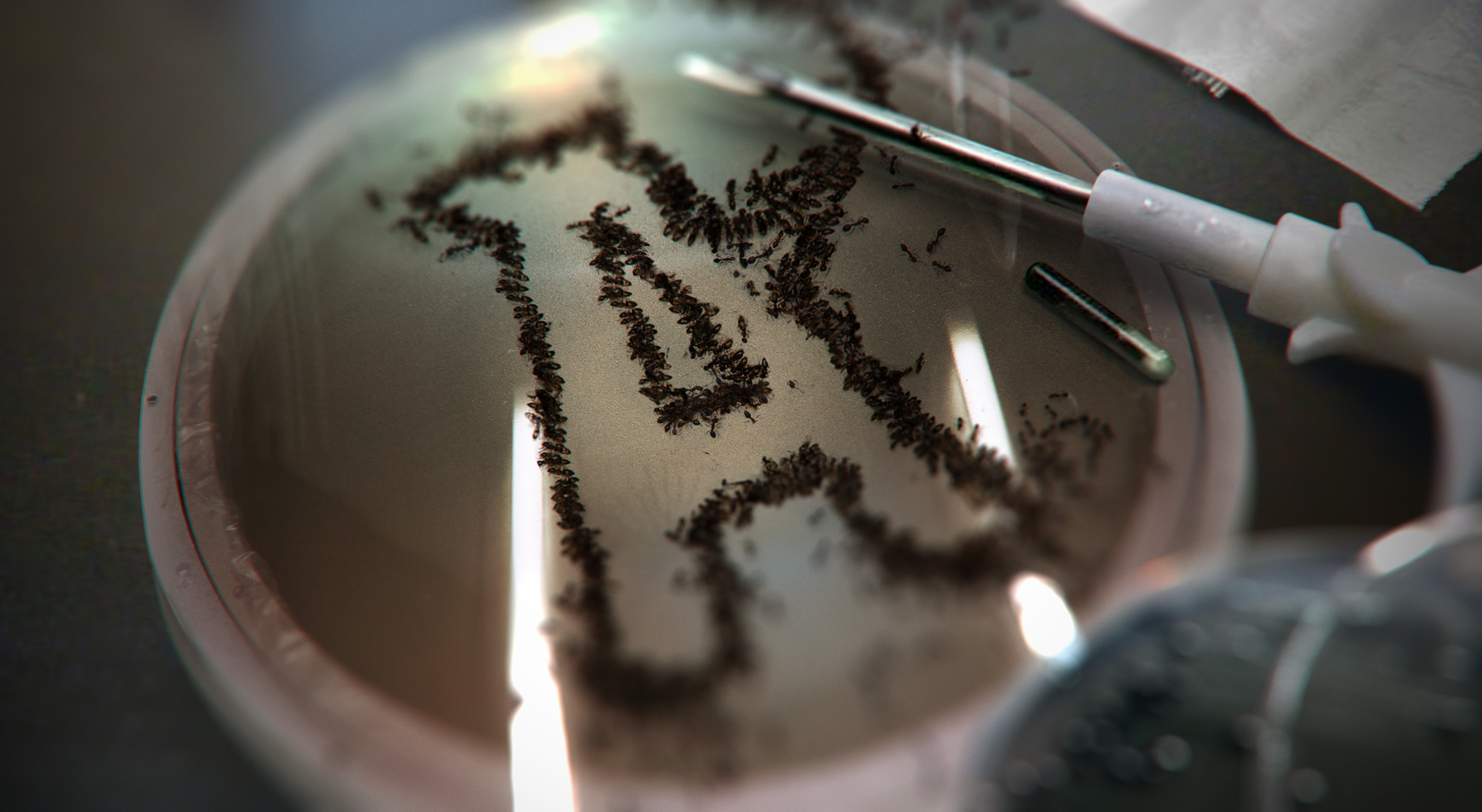 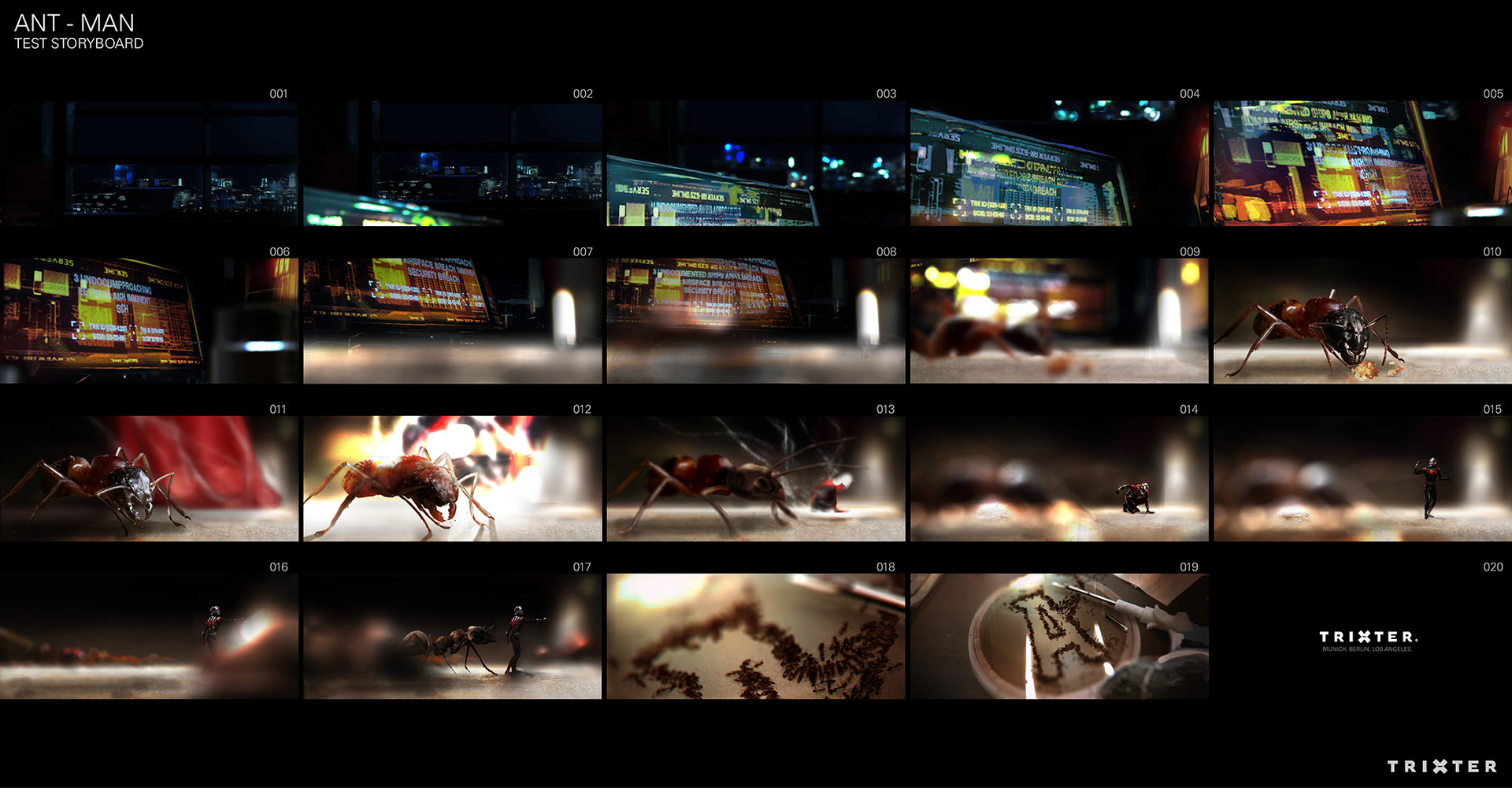 What was your approach to the sizzle reel?

Paolo Giandoso: Director Peyton Reed wanted to use the sizzle-reel to underline the fact that the Yellowjacket suit was not yet complete. Therefore, instead of a hyper-realistic style, I thought of a world where everything that is not the Yellowjacket is made entirely of a glossy obsidian-like material (the dark purple would make the yellow of the costume stand out in every moment) and color and motion graphics were used at specific points to gather the attention of the audience. A point cloud effect would be also used in conjunction to create a feeling of virtuality. I chose a shot (the bridge assassination) and prepared something like forty wedges showing the full range of how these materials and point clouds could be balanced together, and Marvel creatives selected their favorite one to be the style guide for the rest of the reel. The following step was creating a color script for the clip and creating concepts for each location in the reel. In this task, I worked in pair with the talented artist Thomas von Kummant -- who developed the nuclear plant control room and the microchip interior. 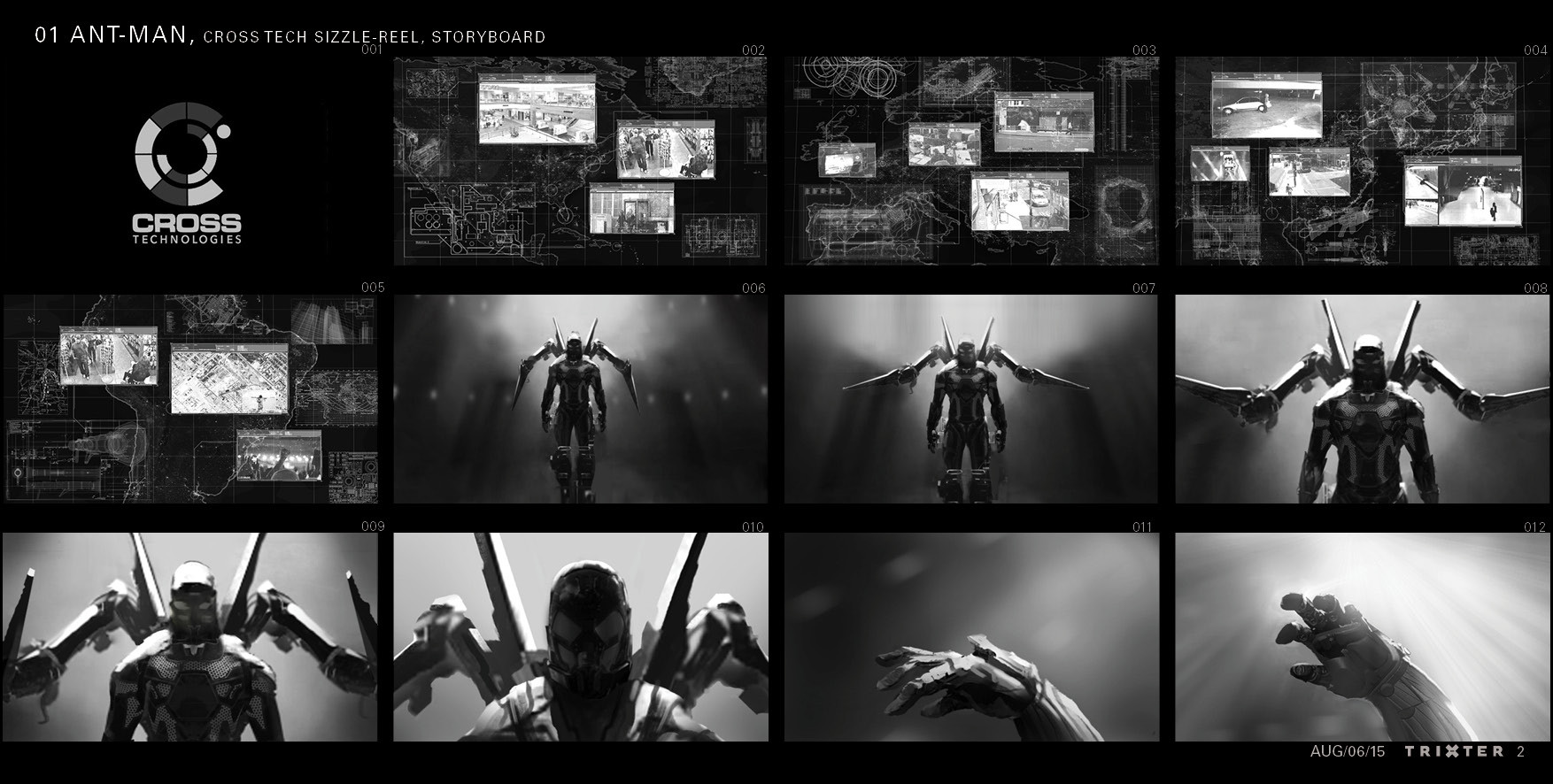 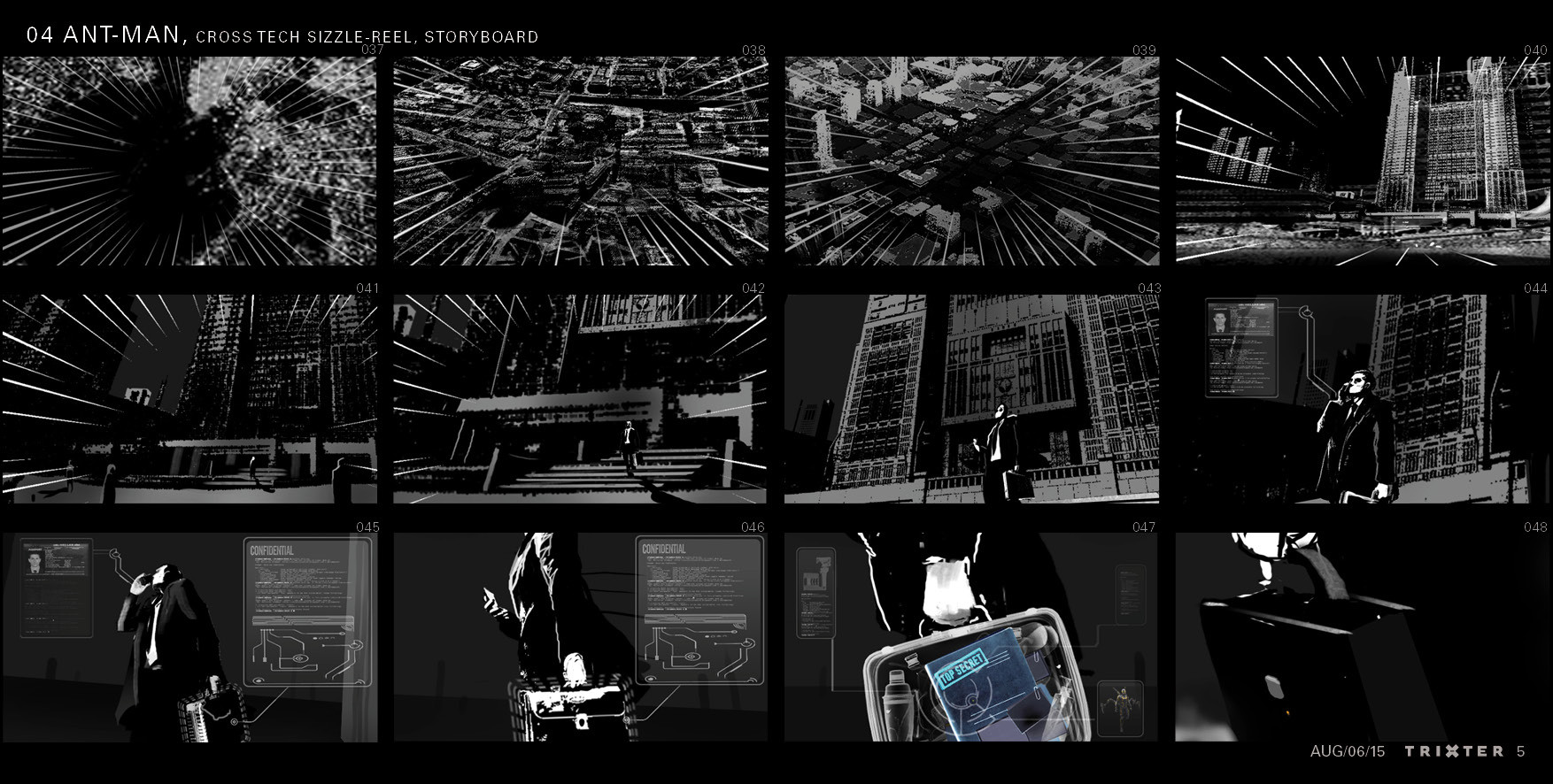 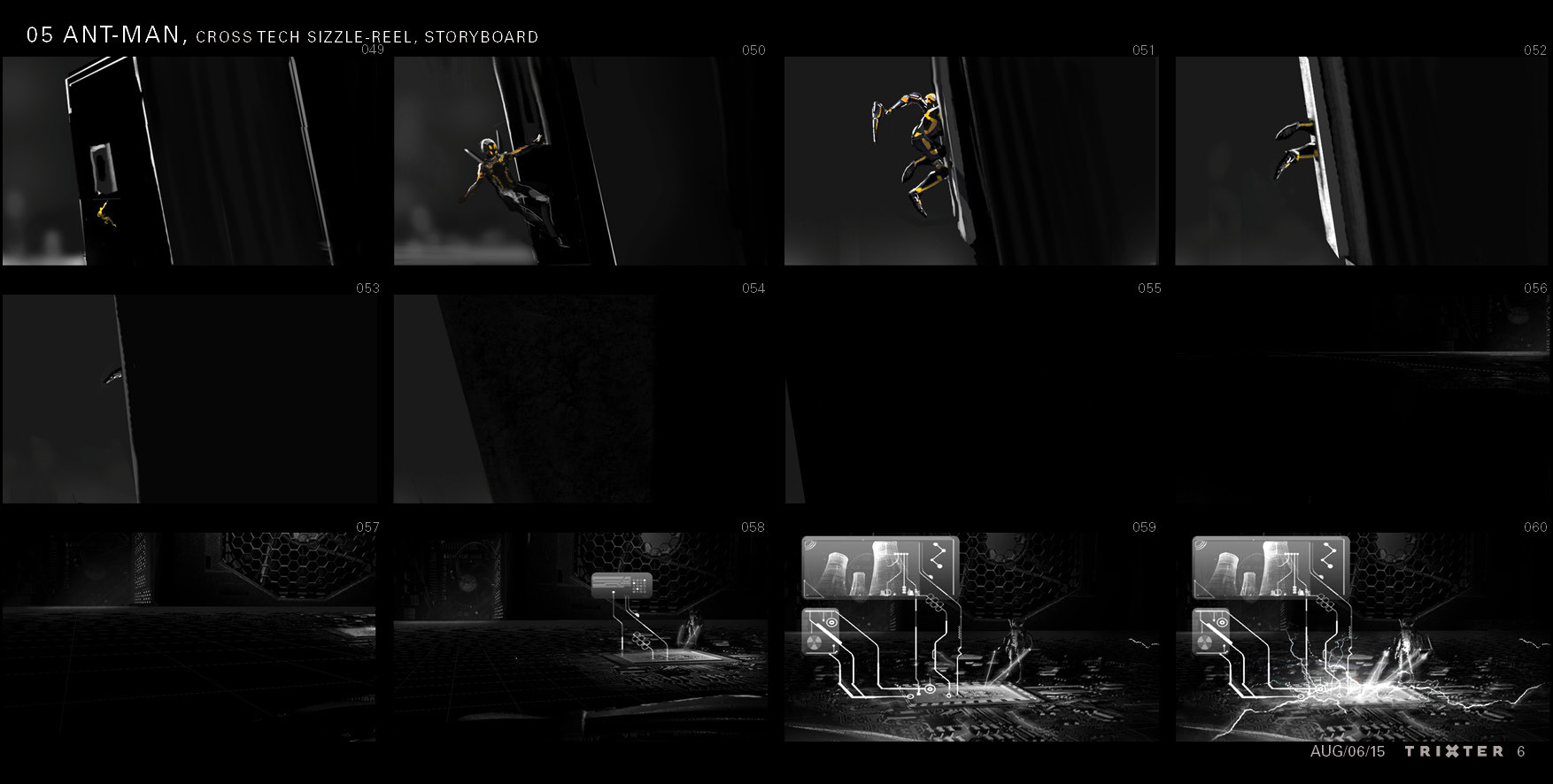 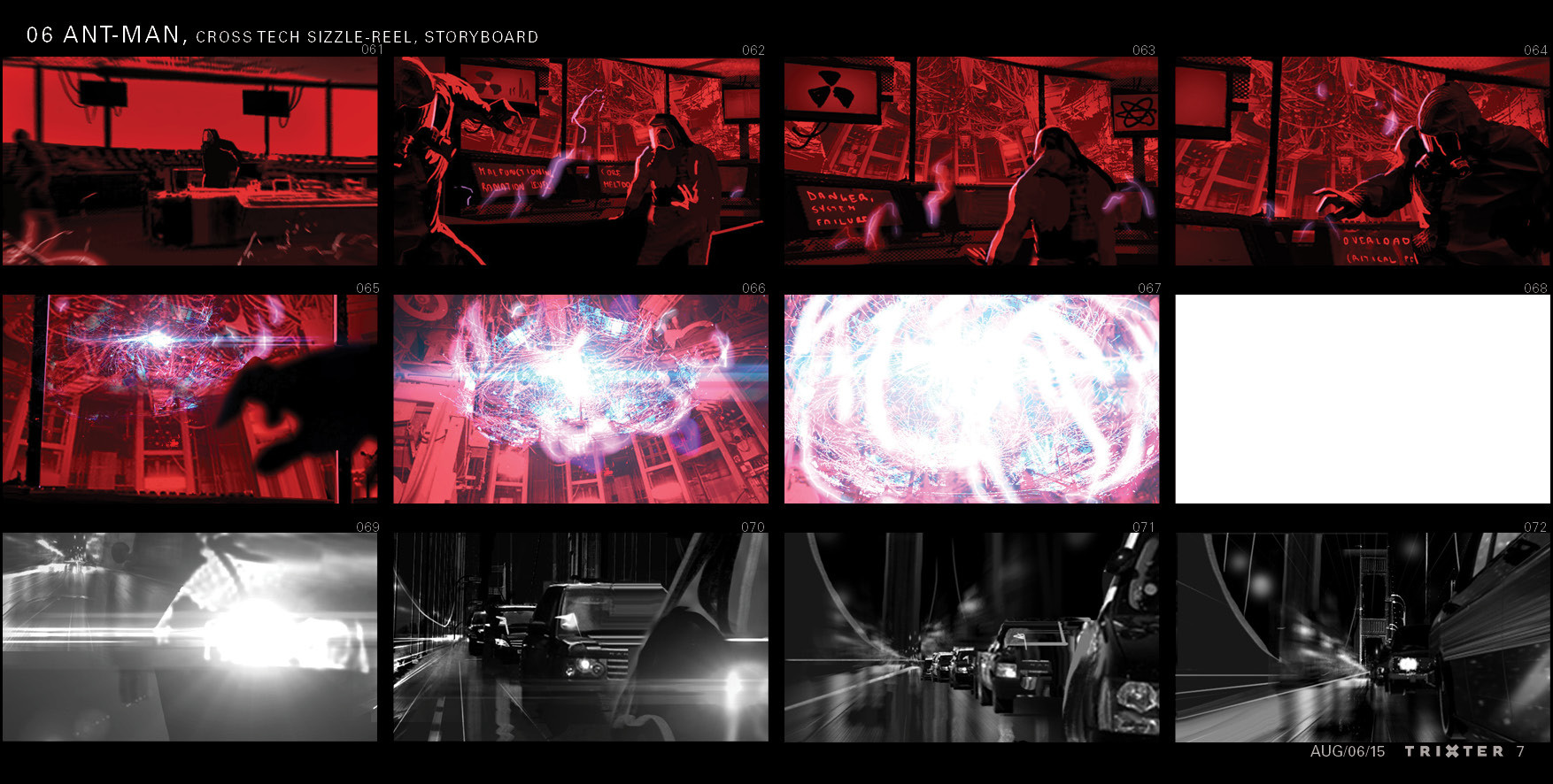 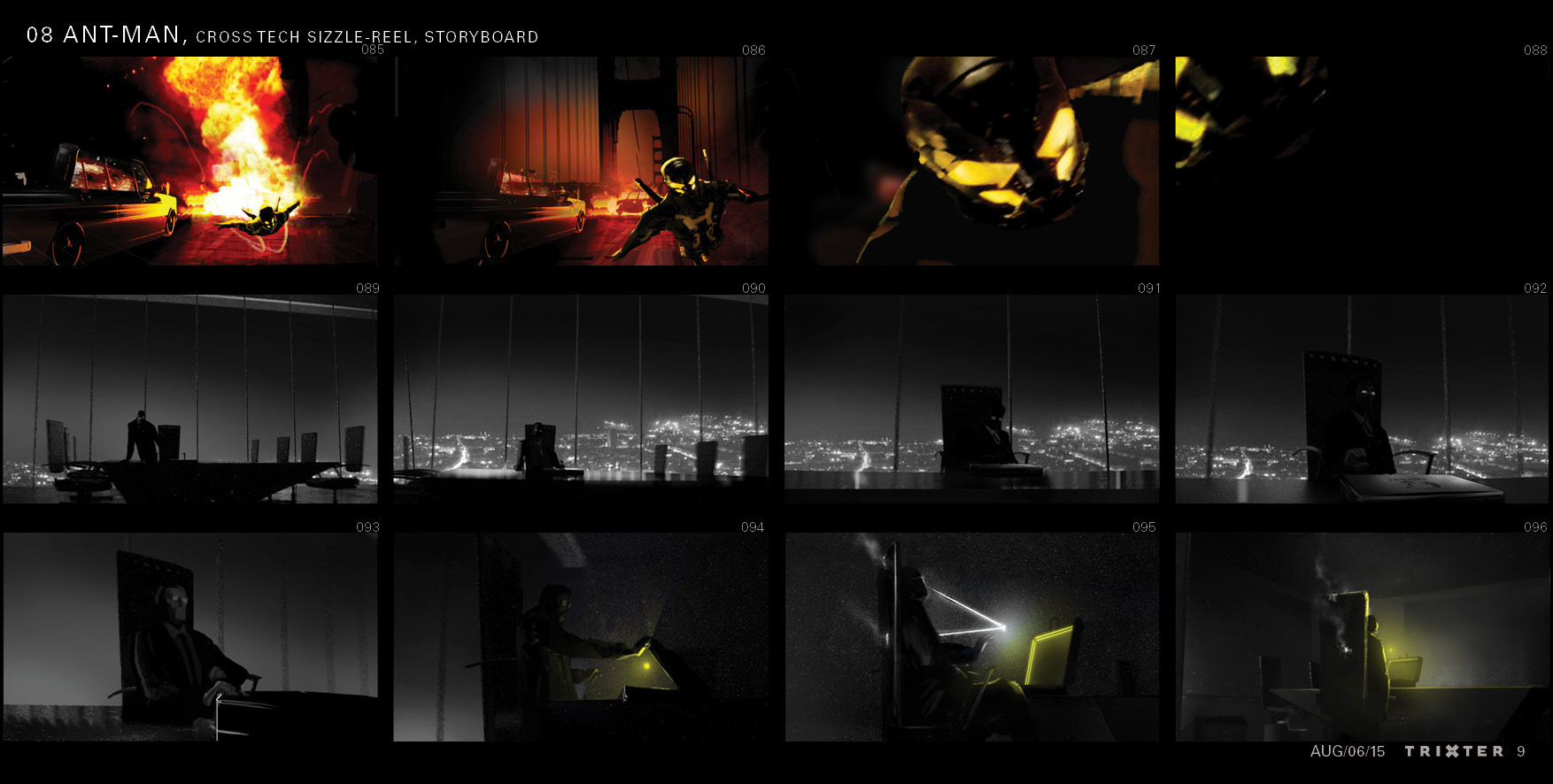 What changes were made to the sizzle reel?

Paolo Giandoso: There were some changes made to the storyboard, as the voice acting had changed and new scenes were added to the script. Marvel's creatives were very focused on keeping the reel plausible and giving a global feeling to it. Therefore, I replaced the combat-drones attacking the Yellowjacket with three Apache helicopters and moved the assassination from the Golden Gate to a more generic bridge. At the same time, it became very important that none of the victims could be identified as coming from a specific nation. So what at the beginning was a Russian secret agent (the first man with the suitcase) and an Italian politician (the man in the car) became more generic figures. 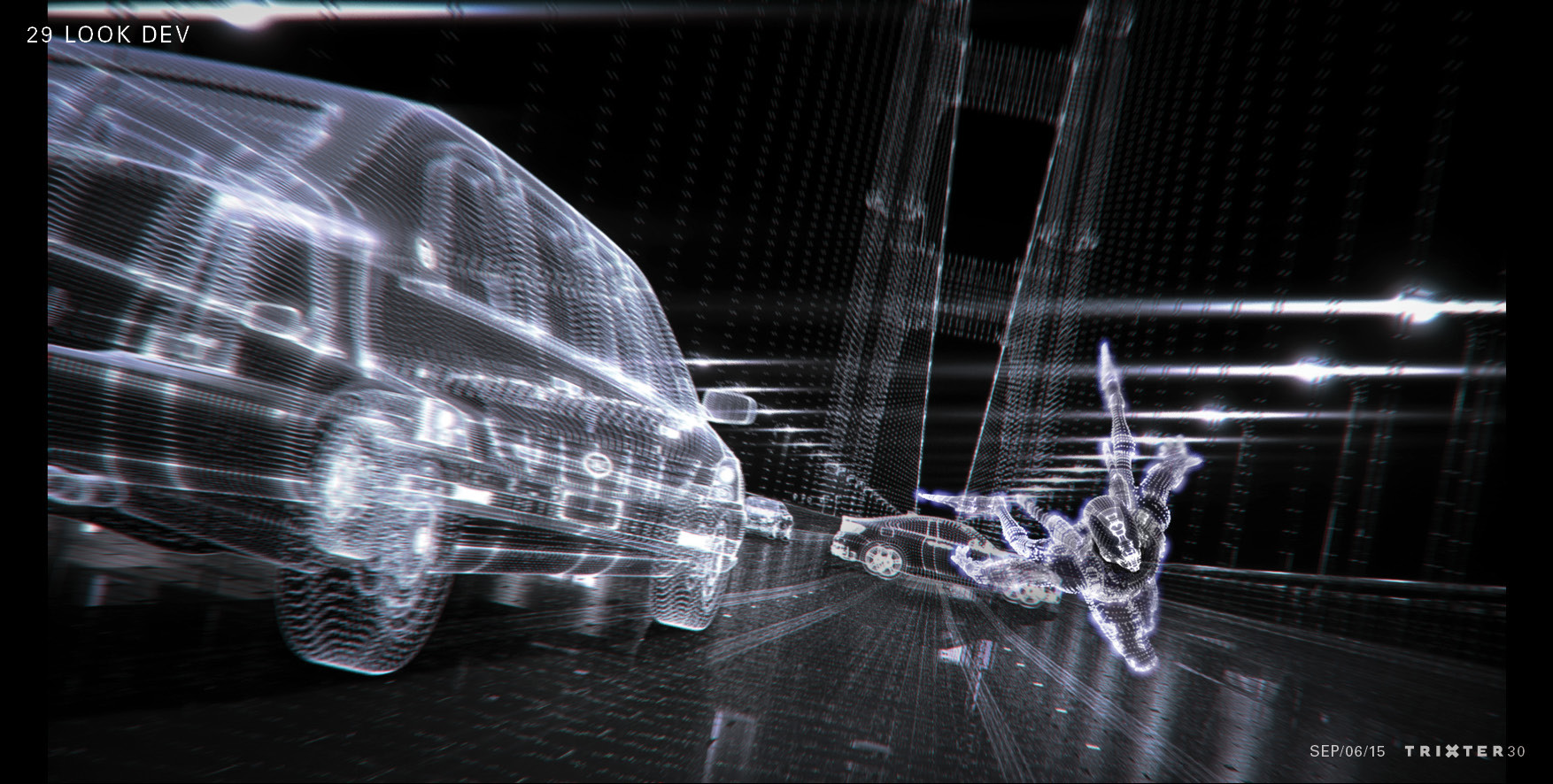 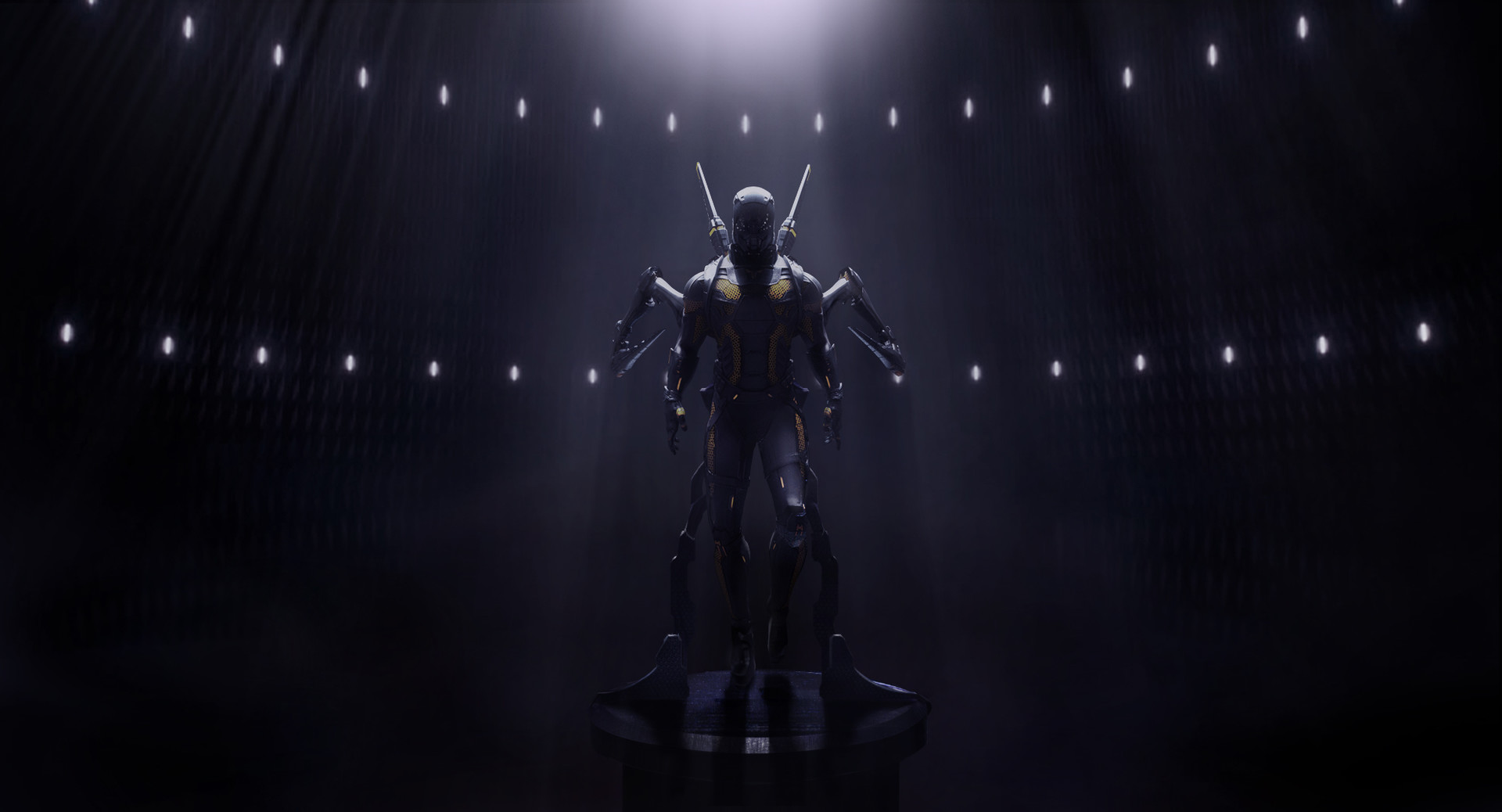 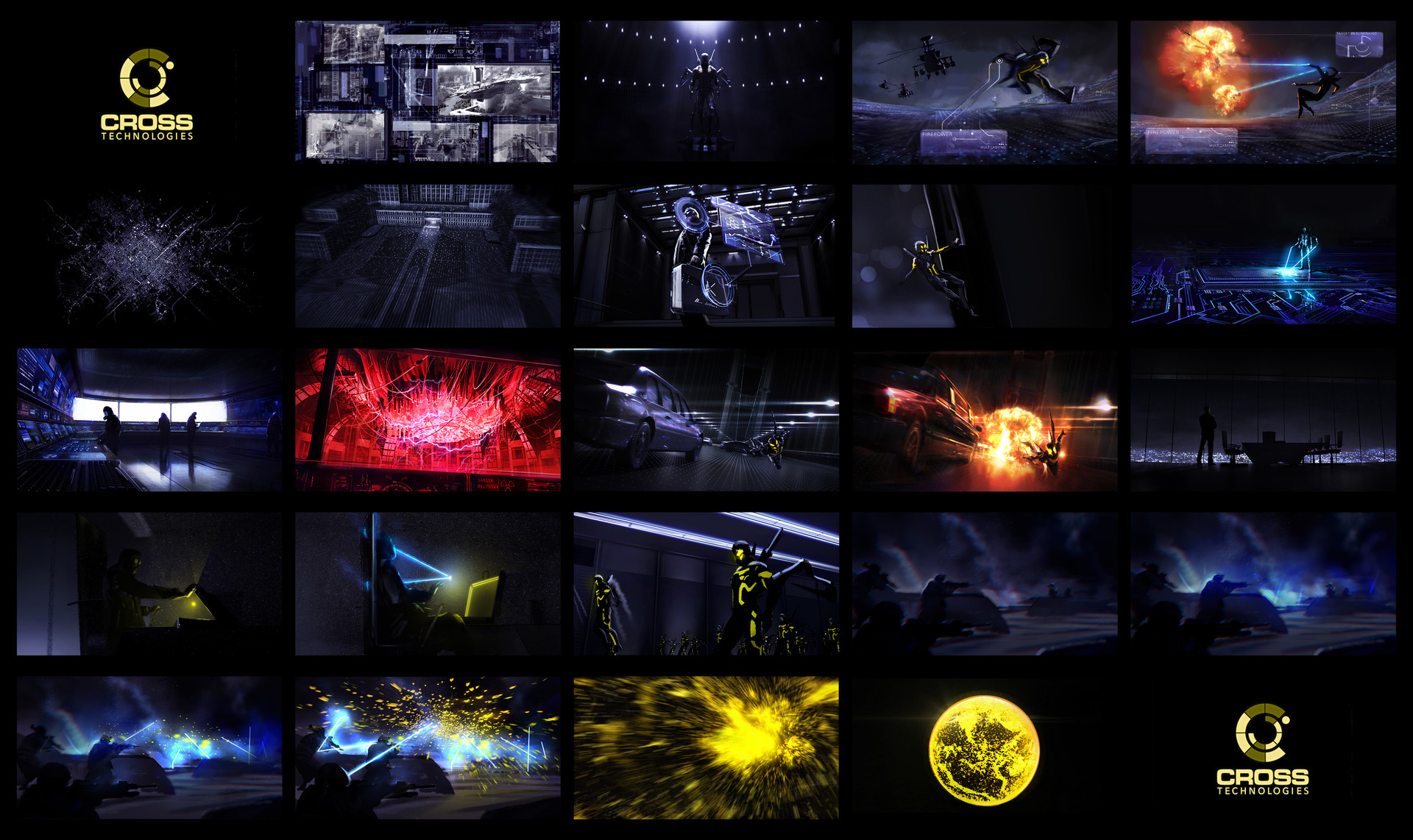