Doctor Strange is now in theaters, and Marvel fans are still buzzing about all the new doors of the Marvel Cinematic Universe the film opens up, as well as the connections it makes to other Marvel movies, past and future.

One of the biggest reveals in Doctor Strange was the big villain of the film, a ravenous Dark Dimension entity known as Dormammu. As the force behind Kaecilius (Mads Mikkelsen) and his disciples, Dormammu nearly gained access to our dimension and consumed it; if not for The Ancient One and/or Stephen Strange's unlikely heroism, the MCU would've been lost before The Avengers ever knew it was under attack.

After seeing Doctor Strange, fans are reacting in a big way to the reveal of Dormammu, with some not liking the cinematic interpretation of the character, while less familiar fans are simply trying to learn more about him.

More: Who is Dormammu?

However, after watching Doctor Strange and seeing how Dormammu exists within the MCU, as comic book fans (obviously) we came away with a different sort of question: Is Dormammu the Galactus of the Marvel Cinematic Universe?

What must be known here is that the Marvel Comics character Galactus is actually part of the Fantastic Four movie franchise, which is owned by Fox, not Marvel Studios. The relationship between Fox and Marvel is frigid, so no X-Men or Fantastic Four characters are coming to the MCU anytime soon - that includes Galactus. But as a major Marvel cosmic entity - and key player in so many big storylines - Galactus is a big loss for the MCU, and rumor has always been that Marvel Studios' bad blood with Fox in part revolves around the latter's refusal to share Galactus, in particular. 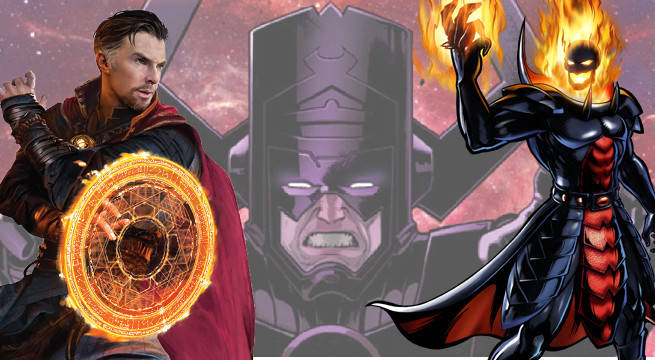 In Doctor Strange, Dormammu is positioned to fulfill much the same function as Galactus:

One could argue that Galactus and Dormammu have always been similar types of villains - but in the MCU, it definitely seems as if the lord of the Dark Dimension is the workaround that Marvel Studios has come up with for not having Galactus. Dormammu could be a player in helping stop Thanos in Avengers: Ifinity War, and/or for whatever Mordo has planned for the forthcoming Doctor Strange sequel. Any tip in the balance of the tenuous truce Strange has established will also bring the threat of Dormamu (and his Mindless Ones!) back to our world.

Best of all, if the Fox/Marvel relationship ever thaws, Galactus and his heralds (Silver Surfer!) can still fit right into the mix without it feeling too crowded. Either way: fans win.