Marvel Comics has revealed Kitty Pryde and Piotr Rasputin’s wedding photo from their upcoming wedding in X-Men Gold. The photo offers a first look at Kitty in her wedding dress.

The photo is drawn by J. Scott Campbell as a variant cover for X-Men Gold #30, where Kitty and Colossus will tie the knot.

The “’Til Death Do Us Part” story arc begins in X-Men Gold #26. You can check out Phil Noto’s covers for X-Men Gold #29 and 30, revealing the wedding party full of X-Men and Guardians of the Galaxy, in the attached gallery.

“After nearly 40 years, I’m extremely excited — and anxious — about telling the next chapter in Kitty and Peter’s epic love story,” X-Men Gold writer Marc Guggenheim said when the wedding was announced. “The wedding is the capstone on a story that is classic X-Men, with Kitty risking it all to save the man she loves.” 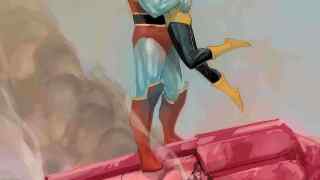 Kitty Pryde proposed to Colossus in X-Men Gold #20. Earlier in the series, Colossus made it clear to Kitty that he intended to marry her, though the two were still taking their relationship slow at the time after being apart and with other people for a while – Kitty had gone to space were her previous fiance, Star-Lord, and Colossus was involved with Domino.

After nearly dying in the Negative Zone, Kitty seemed to have decided to take a more carpe diem approach and turned the proposal around on Colossus, setting up what Marvel has described as the wedding of the century.

Kitty Pryde and Colossus is one of X-Men's oldest romances. Kitty had a crush on Colossus immediately from the time she joined the X-Men as a teenager. They dated for a while but broke up after Peter briefly fell for someone else.