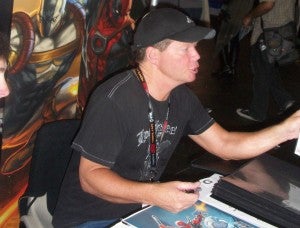 "As a parent I tell my kids it costs nothing to apologize, so here goes: I apologize and am truly sorry to everyone I insulted with my D-list comments. I said it and can't take it back." That's Image Comics co-founder and current Savage Hawkman writer and Deathstroke writer/artist Rob Liefeld, apologizing via Twitter for comments he made earlier today regarding Marvel's announcement of the new Deadpool creative team. Liefeld, who created Deadpool and uses the character as his Twitter background, had intimated that Marvel regularly relegated the character to the D-list, keeping high-profile talent away from Deadpool. The ensuing Twitter firestorm convinced the veteran artist that it was time for him to walk the remarks back. He continued, "I meant it as a classification of so much talent that is unknown to me and I am unfamiliar with--I often flip through Deadpool comics and it appears to my veteran eye that these are new talents cutting their teeth on Deadpool assignments. Often publishers regulate talents to 'lists', A list, B list, etc. I broke the good old' boy club by using the 'list' description. Next time I will not look to cheat the 140 characters and explain myself more clearly. "Gail Simone, Fabian Nicieza and Rick Remender are as far from the D-list as could be imagined. I've praised their work consistently....There's one moniker that I won't be repeating. D-list." In the end, Liefeld asserted that he had never meant to impugn the talent of the contributors to Deadpool books, instead saying that Marvel wasn't prioritizing the character enough and that the result was a lot of young talents turning out great work, but that they weren't famous while doing so. The initial comment inspired almost immediate debate, some incredibly passionate, on behalf of creators like Joe Kelly, Ed McGuinness, Joe Madureira, David Lapham and Kyle Baker, but when confronted with those names, Liefeld held his ground, saying that there still hadn't been A-listers on the title in a decade. While Kelly, McGuinness and Madureira's runs were years ago, of course, Lapham and Baker most recently wrote and drew Deadpool Max, which ran last year. 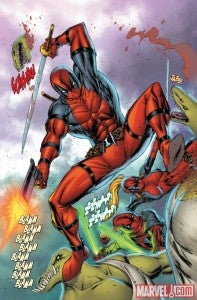 Artist Dave Johnson and writer Rick Remender chimed in to take issue with being categorized as "D-list," as well, with Liefeld taking Remender's comments ("Lot of talented people you just called out as D-list. Might be a better way to congratulate yourself?") as an opportunity to double down on his original statement: "Truth hurts," tweeted Liefeld. "Did I miss the [Ed] Brubaker Deadpool arc? The [Mark] Millar Deadpool arc? The [Jeph] Loeb Deadpool arc. Get over yourself. The flip of my statement is that Marvel doesn't feature their prize talent on Dpool and the character does well-Mostly newbies, hence D-list." The newly-announced creative team on Deadpool, of course, features two "newbies," in the sense that comedian Brian Posehn and G4's Gerry Duggan are not widely associated with comic book writing, although they're hardly novice writers. Maybe that's why Marvel Editor-In-Chief Axel Alonso even got involved, tagging the new creative team and saying, "Welcome to the D-list, @GerryDuggan @thebrianposehn @tonymoore! Howdy Doody just put your name on the list." Of course, one interesting element of that whole exchange is that Marvel's teasers this week, while fairly transparent, are ostensibly blind teasers and have not featured character names or book titles. With that tweet, Alonso has apparently provided the first official public confirmation from Marvel that Posehn, Duggan and Moore will be working on Deadpool. Dave Johnson, though, gets the prize for the night. He tweeted at Liefeld: "Yes!!! I've been elevated to the "D list" of talent. Thanks Rob. Now if I can only learn how to ink while driving a car." And, for your enjoyment, Rob Liefeld inking while driving a car: