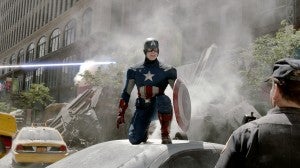 Marvel Studios and Walt Disney Studios have just released a statement announcing the release date for the anticipated Captain America sequel as April 4, 2014. Accompanied by a new photo of Chris Evans as Captain Americain The Avengers, the statement reads as follows:

"The Walt Disney Studios has announced a release date for Marvel Studios' sequel to the blockbuster Captain America: The First Avenger on April 4, 2014.  The second installment will pick-up where the highly anticipatedMarvel's The Avengers (May 4, 2012) leaves off, as Steve Rogers continues his affiliation with Nick Fury and S.H.I.E.L.D and struggles to embrace his role in the modern world."

The film hasn't yet got a director, although the field has been narrowing in recent months following reports that Joe Johnston, who directed Captain America: The First Avenger, will not return. The 2014 release date would likely make Captain America 2 the next Marvel film to go into production following Iron Man 3.