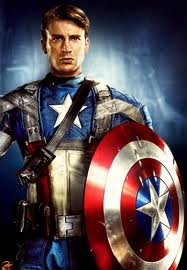 With “The Avengers” a little more than a month away from opening in theaters and “Iron Man 3” to begin filming any day in Wilmington, NC, it’s time for Marvel to start getting cranked up on other high-profile pics—like the sequel to “Captain America.”

And apparently, according to Vulture, an initial field of 10 directors has been cut to three: George Nolfi (The Adjustment Bureau), F. Gary Gray (The Italian Job) and Anthony and Joseph Russo (Community).

While the first two could easily be seen as solid choices to direct an action-packed superhero film, folks might wonder about the Russos.  Sure, they’ve directed films (You, Me and Dupree was one), but they’re known more as TV guys.

But that might have changed with the pair directing the Paintball episodes of “Community.”  The two definitely showed they have the chops to take on an action oriented project.

Not sure when the final decision will be made, but our guess is that it will come somewhere in between the start of filming for “Iron Man 3” and the opening of “The Avengers.” That way if fans aren’t happy with the choice, the news gets buffered by two other powerhouse Marvel films.