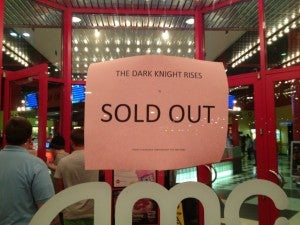 Movie chain AMC, one of the country's largest families of theaters and the hosts of last night's Dark Knight Trilogy tickets where fans could pay $40 to see a limited, one-day engagement of all three of Christopher Nolan's Batman films, concluding with a midnight screening of The Dark Knight Rises, have banned some costumes and all masks in their theaters until further notice following the attack on a crowded cinema yesterday by a gunman dressed in a gasmask and bullet-proof vest. According to a statement from the theater chain, it's only costumes that are affected, contrary to earlier media reports that none would be permitted. "We will not allow any guests into our theatres in costumes that make other guests feel uncomfortable and we will not permit face-covering masks or fake weapons inside our buildings," said AMC, who also indicated that they would be increasing security at least through the weekend to discourage further crimes. "We're reinforcing our security procedures with our theatre teams, which we cannot discuss in detail for obvious, safety reasons," AMC said. "Local law enforcement agencies, our landlords and their and our local security teams are stepping up nationwide to ensure we provide the safest environment possible for our guests." While police say that suspect James Holmes entered through an emergency exit at the back of the theater before launching a gas canister into the audience and opening fire, there had been some speculation that he was more easily able to blend into the crowd while wearing his bizarre ensemble because a number of fans were wearing Batman-themed costumes at the midnight premieres of the film, likely including Bane, whose outfit is vaguely reminiscent of that Holmes is described as wearing at the time of his arrest. Cosplay has, of course, become a part of any major theatrical release going back at least to Star Wars Episode I: The Phantom Menace, when local news media around the country ran hours of B-roll of Darth Vaders and Storm Troopers lined up around the block to get tickets. Franchises like Batman, The Avengers and Harry Potter have seen at least a smattering of moviegoers in costume at any early screening. On the other hand, many municipalities already have laws on the books forbidding individuals from wearing masks in public.