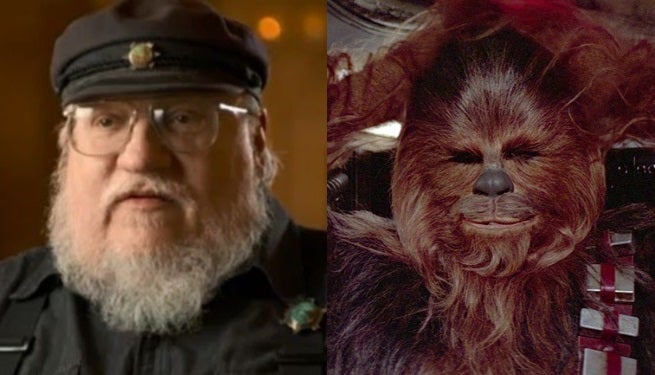 Most know George R.R. Martin as the creator of the hugely popular fantasy series A Song of Ice and Fire, which is the basis of the hugely successful HBO television series Game of Thrones. Now, evidence has surface on the Internet to suggest that he may have inadvertently had a hand in the creation of the Star Wars character Chewbacca as well.

As reported by /Film, Chewbacca look quite different in the early design phases than he does in the films. Ralph McQuarrie's original design for Chewbacca was used to create Zeb Orrelios in Star Wars Rebels, so if you take a look at him you have an idea of what Chewbacca might have looked like.

The turning point came when George Lucas handed McQuarrie a stack of art to use for inspiration in furthering the character's design. Among the art stack was a John Shoenherr illustration for a George R.R. Martin's short story, "And Seven Times Never Kill Man!" that appeared in Analog in 1975. The below image shows just how much influence the the illustration of characters form Martin's story seems to have had on Chewbacca's design. 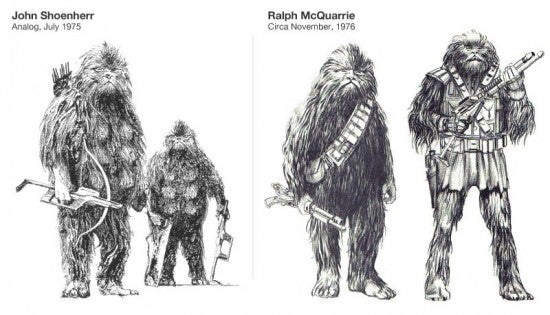 Note that the image is not Chewie's final design - it would take a few more passes before he be fully realized - but the illustration definitely seems to have shifted McQuarrie's thinking in a new and different direction.

It's not uncommon for designer to assemble "look books" for a project, meant to inspire their design, and lots and lots of designers had a lot of input into everything that went into the final product that was Star Wars, as the /Film article explains in more detail, but it's interesting to see how a future genre-fiction icon helped shape the classic genre fiction of the past without even realizing it.