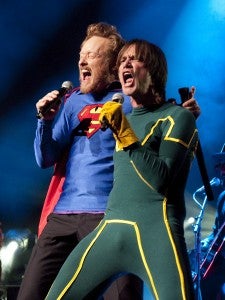 Jim Carrey, who once famously appeared with Conan O'Brien dressed as the title character from Mark Millar and John Romita, Jr.'s comic book and film Kick-Ass, is reportedly being courted by director Jeff Wadlow to appear in the fim's sequel. According to Deadline Hollywood, the studio has their eye on Carrey to play The Colonel in Kick-Ass 2: Balls to the Wall. So far, many of the cast additions have been members of Kick-Ass's motley crew of superheroes, and The Colonel, described by Deadline as "a showy supporting role," is no different; the character is instrumental in putting the band together. Carrey isn't a stranger to comic book roles; in addition to appearing as The Riddler in Batman Forever, the star also toplined a film version of the fan-favorite indie comic The Mask.