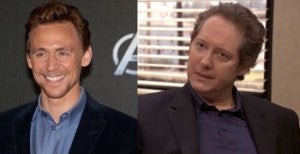 fter Warner Bros. announced Ben Affleck as Batman, there was somewhat of an Internet backlash as some fans started petitions to have Affleck removed as Batman. A number of other actors and celebrities wound up speaking out against the backlash and voicing their support for Ben Affleck. While there hasn't been a big backlash or any petitions yet, the casting of James Spader as Ultron has certainly caught many by surprise. Class act that he always is, Tom Hiddleston wasted no time in becoming the first celebrity to weigh in with words of encouragement and support. Hiddleston tweeted, "Go on, James Spader. Go get 'em. @Avengers #AgeOfUltron." Tom Hiddleston won rave reviews for his performance as Loki in the first Avengers movie, and even though Whedon is going with a different villain the sequel, Hiddleston is being a real team player by rallying behind James Spader. Perhaps the two villains may one day team up in a future Marvel movie. The Avengers: Age Of Ultron is scheduled to be released in movie theaters on May 1, 2015.