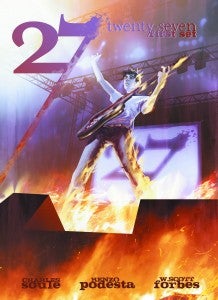 "I just work hard, and work a lot, and try to make sure that everything I do has a purpose – that whatever I’m doing at a given moment can be tied to one goal or another I’m trying to achieve. I’m very fortunate to love just about all of the stuff I have going on." The things that Charles Soule is describing in that statement could be anything. He's a long-time musician, he runs his own business, has a social and personal life and finds the time to write interesting and creative comics as well! The author of works such as Strongman and the musically-influenced series 27 talked to me about how all these areas of his life work together, and what fans can expect in the future!

Soule's work on the series 27 has gained attention for the concept behind the book, which focuses on a strange phenomena that has repeated itself frequently in the music industry: premature death for gifted artists at age 27. The idea for the comic came from Soule's own experience in music as he put it, "I grew up playing music, first on violin, then guitar, and my musical education didn’t stop at the instruments. Particularly, while I was in high school, I devoured books about rock history, guitar magazines, you name it. So, I’ve known about the 27 Club for a while, and it seemed like a concept with tons of drama built right in – there’s a lot to work with."

The main story focuses on guitarist Will Garland and his quest to avoid the curse of dying at age 27 that affected the likes of Jimi Hendrix, Kurt Cobain and Jim Morrison along with others. Soule believes that there's a lot to offer in this series, saying, "It’s a pretty crazy ride, filled with nods to rock lore, supernatural adventure and sweet twists and turns." One of those interesting twists is a puzzle that Soule has placed in the work, based on guitar chords. Soule promises that there's a great prize for the winner, "When you take the chords and lay them out, they can be decoded to make a set of instructions. My plan was to reward the first fan dedicated enough to solve the puzzle with a plane ticket to a comic convention of their choice. Unfortunately, no one’s solved it yet, and I really wanted to get that ticket! So, I’ve changed up the game slightly – I put the solution to the puzzle into the 27 trade, which hits comic shops on June 29. Anyone who picks up the trade and follows the instructions,which are super easy, in the first week after the trade is out will be entered in a drawing for the ticket."

With the twists and turns, supernatural elements, hidden puzzles and musical overtones in the story, the artwork for the series takes a similarly interesting vibe. " The credit for making 27 work visually has to be assigned to my artistic collaborators on the book: Renzo Podesta on the interior art and Scott Forbes on the amazing painted covers. The very best artists can take words on a page and turn them into something infinitely more expressive than what was originally scripted, "said Soule, " Renzo gave the panels an almost impressionist flow, which I think really suits the book’s supernatural underpinnings and its roots in music. The book reads visually like listening to an amazing song." Along with those visuals, the previously mentioned trade paperback contains plenty for readers, too, such as a 12-page back-up story, the puzzle solution and lots more! 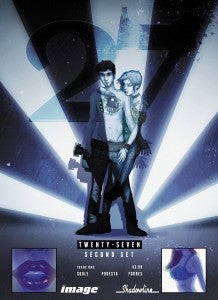 Soule also gave a preview of what's in store for the next round of 27, which will arrive in stores this September. Titled 27: Second Set, this mini will focus on another piece of the music realm that a few acts belong to: the one-hit wonder. "I’ll be taking Will Garland and putting him through the wringer again as he attempts to avoid being yet another name on the long list of OHWs that litter rock history. The first mini was about creativity and its sources, and Second Set is mainly about fame: what we do to get it, why we want it, what it’s really worth if we do get it." The title is currently available for order in Previews and fans are encouraged to start ordering now!

Another of Soule's works, Strongman, offers readers a different reading experience, but not any less engaging than 27! " Strongman is great! It’s an action/crime series in the vein of Sin City, but much less soul-crushing... The main character, Tigre, is a washed-up old luchador – a masked Mexican wrestler. He’s about 65 years old, and he’s mostly just a pathetic drunk. He’s still huge, though, and you wouldn’t want to mess with him," Soule said. After having saved his New York City neighborhood in volume 1, Tigre attempts to save ALL of Mexico in volume 2, which will be available this August.

Soule's busy schedule also includes a new graphic novel titled Strange Attractors on the way (published by Archaia), and other projects as well, showing off his diverse writing background which originated in novel writing. While he loved writing novels, comics offer something altogether different, "There’s a rush I get from seeing new pages from an artist that’s always fantastic. There’s also a sense in comics that absolutely anything is possible. If I want to write a story about a serial killer living in an undersea community who’s also a genetically engineered shark-person, and a working clown, then I can do that. There are no limits at all – no expectations from the audience that a comic has to be one thing and not another. I love it."

27, Strongman and More! Our Chat with the Multi-Talented Charles Soule