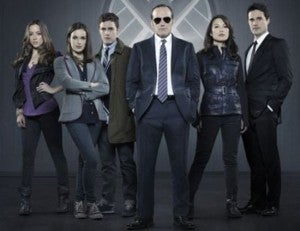 The ABC Fall Preview Special Presented by The Chew will feature a look at ABC's new fall primetime lineup, including Marvel's Agents of S.H.I.E.L.D. The special is hosted by entertaining and style guru Clinton Kelly from Walt Disney Studios in California.

The hour-long special features exclusive interviews conducted by the hosts of The Chew with many of ABC's hottest stars, as well as first-look footage and behind-the-scenes access. The show will feature the casts of Marvel's Agents of S.H.I.E.L.D., Lucky 7, Betrayal, Once Upon a Time in Wonderland, Super Fun Night, Trophy Wife, Back in the Game and The Goldbergs.

Here are the highlights for the Marvel's Agents of S.H.I.E.L.D. part of the special. Chef Michael Symon receives Level 7 clearance and travels to an undisclosed location to sit down with the cast of Marvel's Agents of S.H.I.E.L.D. for their first-ever television interview together. Coulson lives! Agent Phil Coulson, played by actor Clark Gregg, is back in action and now has his eye on a mysterious group called The Rising Tide. In order to track this unseen, unknown enemy, he has assembled a small, highly select group of Agents from the worldwide law-enforcement organization known as S.H.I.E.L.D. (Strategic Homeland Intervention Enforcement and Logistics Division), and they share their mission with Symon -- to investigate the new, the strange and the unknown around the globe, protecting the ordinary from the extraordinary. Marvel's Agents of S.H.I.E.L.D. premieres Tuesday, September 24 (8:00-9:01 p.m., ET).

The ABC Fall Preview Special Presented by The Chew airs on Sunday, September 1 (7:00-8:00 p.m. ET) on the ABC Television Network,