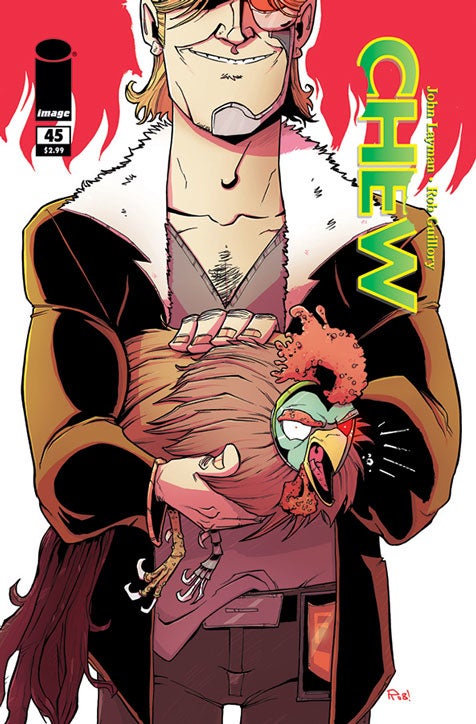 There are plenty of great humor comics that defy the need for story or drama. Image Comics is publishing two of the funniest funny books of today, Punks and God Hates Astronauts, sans plot. However, that doesn't mean humor cannot work hand-in-hand with drama. In fact, large casts of characters, long-running plotlines, and heartbreaking theatrics can make for great humor as proven by the current king of comedic comics: Chew.

It would have been impossible for Chew #45 to not deal with the fallout of the most traumatic events in the series' history in Chew #44. That issue guaranteed jaws would be left hanging and that (unlike superhero comics) nothing ever would really be the same. John Layman and Rob Guillory understand that you don't follow impact with hand wringing and exposition though; you provide real reactions and consequences. Chew #45 is all about the characters of the series responding to terrible events like the fully formed people we have come to know them to be. This may seem like basic storytelling, but it's so common to see a story become lost in itself following the impact of a significant change. Layman refuses to redirect the story or move ahead in time. He confronts the challenges of the present and manages to craft moving drama in this outrageous acid trip of a comic book.

There's a lot of talking and face-to-face confrontations in the aftermath that composes Chew #45. Guillory carries the weight of making so many dialogue-heavy sequences fit within the very active style of this comic and succeeds admirably. His hyper-expressive artwork allows characters to tell a story and drive action with their faces alone. Every expression makes it clear how a characters feels and what motivates them. This talent is obvious when Tony Chu is lashing out in rage, but it's even more impressive when subtlety is required. In the face of loss and change, characters provide complex, multi-dimensional emotions that can be found in solemn faces and pained expressions. Guillory's mastery of cartooning can be found in the faces of each of his characters.

This applies to his figures as well. When characters are forced to sit in a waiting room and talk for several pages, he maintains activity within his panels by having them respond to the action of what is being said. Small gestures and changes in body language help to avoid any tedium from setting in. That is not to say that Chew #45 is without the propulsive action associated with the series. Guillory has an opportunity to reinvent another federal agency here and the entire sequence crackles with energy.

For all of the tension that is released in Chew #44, Layman knows better than to lose the thread of his story or give his readers more than a minute of rest. As soon as it seems that things might begin to settle after a series of painful confrontations and realizations, the tension is ratcheted up again. The final page is absolutely painful to read.

The quality and craft of this issue makes the opening couple of pages all the more disappointing. They feature the return of Harold Chu who performs in a drag show as Miso Honey. The proliferation of armpit hair and five o'clock shadow is a joke that has been seen before in Chew, one that becomes increasingly unfunny as it is repeated. Unlike other stereotypes presented in the series, this one has no character to balance the mockery. It's lazy at best and transphobic at worst.

Despite that misstep, Chew #45 is another great installment in the series. It provides all of the twists and heartbreak of a great tragedy, without losing the wacky, comedic tone that defines the series. Layman and Guillory walk a tightrope to craft what is the best written funny book currently on the stands.

ADVANCE REVIEW: Chew #45 Increases the Drama Without Losing the Comedy