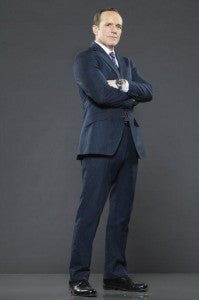 If you haven't watched the pilot episode for Agents of S.H.I.E.L.D. yet, then be aware that this article contains spoilers from the show. If you have already watched the pilot episode for Agents of S.H.I.E.L.D., then you probably know that the reason behind Agent Coulson's return is still somewhat of a mystery. In the Agents of S.H.I.E.L.D. pilot, Agent Coulson indicates that he "stopped breathing for about forty seconds" after Loki stabbed him through the chest in The Avengers. Coulson also indicates that he recovered for a few weeks in Tahiti. So the simple explanation seems to be that S.H.I.E.L.D.'s medics were able to revive Coulson, but Nick Fury kept it secret from The Avengers, because he wanted Agent Coulson's death to be motivation for them. However, after Coulson provides his explanation and leaves the room, Agent Maria Hill seems to indicate there is more to the story. A medical agent turns and asks Hill, "He really doesn't know, does he?" To which, Hill responds, "He can never know." Given Agent Hill's mysterious comment, here are some theories we have on how Agent Coulson might have returned. Scarlet Witch Brings Him Back – In The Avengers movie, there was a reference made to Agent Coulson dating a cellist, which many have interpreted as a reference to the Scarlet Witch. Director Joss Whedon has already revealed that Scarlet Witch will be a part of Avengers: Age Of Ultron, and the Agents Of S.H.I.E.L.D. TV series ties into the movies. In some Marvel Comics storylines, Scarlet Witch has had the ability to bring people back from the dead. Could Scarlet Witch have resurrected Agent Coulson? If so, then maybe there was some huge sacrifice she made as part of using magic to bring back Coulson, which S.H.I.E.L.D. wants to keep secret. Agent Coulson Was Never Alive To Begin With – What if Agent Coulson was always some type of android created by S.H.I.E.L.D.? Maybe, Agent Coulson never really existed, and any time one of the Coulson androids is destroyed, S.H.I.E.L.D. just activates a new android. It would make sense from the perspective that S.H.I.E.L.D. wouldn't want Coulson to know he's an android. Agent Coulson Is An Inhuman Or Gifted – Numerous rumors suggest that Marvel Studios is in process of developing an Inhumans movie. Who is to say that Agent Coulson was just a normal human being? Maybe, Coulson is gifted himself, so he didn't die when Loki stabbed him. If Coulson is one of the Inhumans, it could help lead into an Inhumans movies. Also, S.H.I.E.L.D. might not want Coulson to know he has special abilities, making him gifted just like the people he is charged with tracking down. The New Agent Coulson Is A Life Model Decoy – There have been numerous theories that Loki stabbed a Life Model Decoy instead of the real Coulson. However, such a theory wouldn't explain why Agent Hill would say that Coulson can never know the truth. The only explanation that might explain Hill's comment is that the real Agent Coulson was killed by Loki, and the new Agent Coulson is actually a Life Model Decoy. Agent Coulson Is A Cyborg – Maybe, the explanation has nothing to do with magic, special abilities, or androids, but it's just good old-fashioned S.H.I.E.L.D. science. It certainly appeared as if Loki stabbed Agent Coulson straight through the heart. What if S.H.I.E.L.D. replaced Coulson's heart with a robotic heart? Maybe, Agent Hill doesn't want Coulson to know that he's a cyborg.