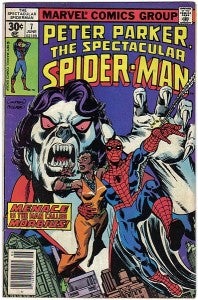 In a bizarre Twitter exchange with the official Marvel Comics Twitter account, one of The Joker's clowns from The Dark Knight is suddenly in the mix to play Morbius, the Living Vampire in a cameo in The Amazing Spider-Man 2.

After Marvel tweeted a teaser image of Joe Keatinge's upcoming Morbius series, along with a link to a story on Marvel's website about the character, Twitter user Stefanie Levina logged on to claim, "My amazing best friend and partner@asimaahmad is playing #Morbius in #TAS2 which may be called#SpectacularSpiderman."

Asim Ahmad, who has played small roles in The Dark Knight and Inception, followed up--but not to refute the claim, only to downplay the role of the character in the upcoming Sony sequel.

"Morbius is only mentioned in two pages, not a big part," tweeted the actor.

The likelihood of there being any credibility to this is low, in part because none of the involved parties (Marvel, or Ahmad) have removed the offending tweets yet, but it's certainly interesting that a working actor of some note wouldn't reject it out of hand. A few minutes later, on an unrelated thread on his own Twitter account, he talked about his job requiring him to read a lot of Marvel Comics.

The rumored title change is interesting; while fans may embrace such a thing, and the recent trend in sequels is to avoid numbering them for the most part (see Thor: The Dark World, Captain America: the Winter Soldier, etc.), it seems unlikely that Sony, who understand you might need to reboot again in 5 years, would want to burn through notable titles like Spectacular Spider-Man, Web of Spider-Man and other recognizable trademarks.