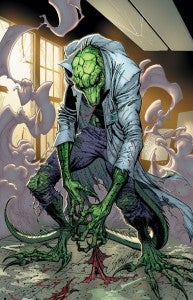 Well, Rhys Ifans he's not--but in this cover to The Amazing Spider-Man #688, due out in comic shops the week before The Amazing Spider-Man storms theaters in early July, superstar artist J. Scott Campbell brings his unique visual style to the labcoat-wearing, slathering gecko-looking version of the iconic Spider-Man villain. Campbell's take on Spider-Man is a fan-favorite, generating some of the most popular (and controversial) images of the last twenty years in the comics, and he's back in the saddle as part of Marvel's "No Turning Back" event that pits Spidey against his silver-screen nemesis just in time for Sony's reboot of the popular film franchise.

J. Scott Campbell Covers "No Turning Back" In AMAZING SPIDER-MAN #688!

Marvel is proud to present your first look at fan favorite artist J. Scott Campbell's variant cover to Amazing Spider-Man #688, kicking off "No Turning Back" this June! Someone has tampered with the grave of Billy Connors and it's up to Spider-Man to hunt down one of his greatest foes: The Lizard! But Spider-Man will have his hands full when he takes on Curt Connors, AND Morbius the Living Vampire! Can Spidey handle both of these monsters before it turns into an all-out brawl?  The superstar creative team of Dan Slott and Giuseppe Camuncoli bring you high stakes action and drama like no other in Amazing Spider-Man #688,  swinging into comic shops everywhere, the Marvel Comics app and the Marvel Digital Comics Shop this June. AMAZING SPIDER-MAN #688 (APR120615) AMAZING SPIDER-MAN #688 CAMPBELL LIZARD VARIANT (APR120616) Written by DAN SLOTT Pencils & Cover by GIUSEPPE CAMUNCOLI Variant Cover by J SCOTT CAMPBELL FOC – 6/4/12, On-Sale – 6/27/12

Amazing Spider-Man Preview: A Very Different Look at the Lizard