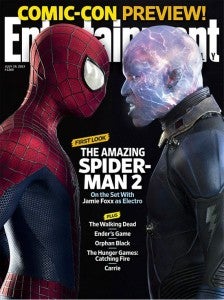 Andrew Garfield's ideas for Spider-Man have been making headlines across the entertainment media. But Garfield's views on Spider-Man's sexuality wasn't the only interesting thing that he told Entertainment Weekly.

Andrew Garfield also shared his thoughts on the Amazing Spider-Man 2 script, and it seems he's quite a big fan of it. Andrew Garfield said, "This time we have this very, very good script that makes a lot of sense."

Garfield was reportedly impressed by the balance between Spidey's humor and Peter Parker's emotional depth. Andrew Garfield explained, "I almost cried. Because I was like, 'This is what we've needed and this is what we were missing a little bit in the first one.' I just felt this warm rain of reassurance rushing through my soul. I was like, 'Ok, we're fine.' If we mess up, it's my fault now."

New PS5 Video Imagines What the UI Could Look Like