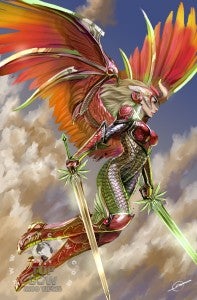 Spinning out of the pages of Top Cow's Witchblade comes an exciting new title, fresh off of the events surrounding the "War of the Witchblades" storyline. Dani Baptiste will assume her new role as the Angelus, the human bearer of the primal force of light, in Angelus, a series geared towards giving Dani her own voice while also giving Sara Pazzini the main, solo focus in the regular Witchblade title. The book will be the first of a six-issue series, and will kick off in December of 2009. Writer Ron Marz was particularly enthusiastic about the opportunity this new series provided. “Moving Dani into her new role as the Angelus, and into her own mini-series, allows me to approach her character and the concept from a fresh perspective. Just like when I took over Witchblade, my goal with Angelus is to start with the foundation we already have, and build something new and exciting from there," said Marz. Issue one will see Dani return to her roots in New Orleans, all the while dealing with the responsibility of controlling the Angelus force. Add the complicated relationship with Finch, a girl who has already formed a complicated history with our heroine. Fans of the series will see a lot of action in this series, and be sure to keep up with the now solo adventures of Sara Pezzini in the pages of Witchblade!

Angelus #1 Ushers Witchblade's Dani Into her own Series!