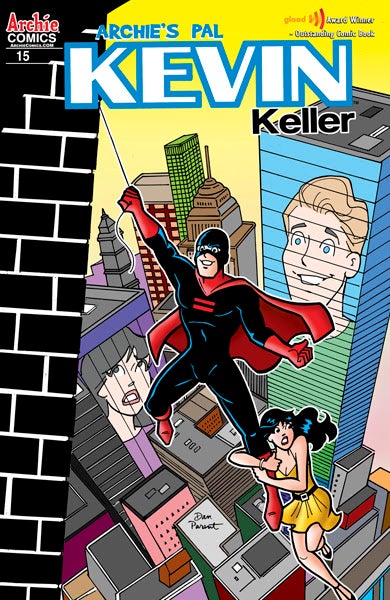 will conclude with July's #15, closing out the first monthly comic from the publisher -- and one of the only ongoing titles from any mainstream American publisher -- to star an openly-gay lead character.

The introduction of Keller is just one of a handful of recent moves that have put Archie Comics back on the map creatively, reinvigorating interest in a line that had felt somewhat stale for years before the Mayberry-esque feel of Riverdale evolved to include some more sophisticated and realistic situations -- something it managed to do without getting overly dark or changing the tone and feel of the books and their locale.

For Keller, the end of his title means a larger role in the "Archieverse" while, for now, they work on relaunching the character with a new direction that his creator says didn't feel like an organic continuation of the existing title.

"To be clear, we’re not canceling the book: It’s ending so we can take a minute to plan a relaunch for the character. In the meantime, Kevin will continue to be a big part of the other Archie titles— including Afterlife with Archie," said Dan Parent, the series writer who created Keller, in an interview with NewNowNext. "It’s about direction for the character. I’ve had some ideas for Kevin that I have discussed with the powers that be at Archie, and these ideas would work better as a relaunch rather than as a continuation of the current book."

Those "Powers That Be" likely include Roberto Aguirre-Sacasa, the Afterlife With Archie writer who recently took over as the Editor-in-Chief at the publisher. One of his first announcements upon taking the job was that Archie Comics will work on a title with Girls creator Lena Dunham.

Between now and the planned relaunch, the legacy of the character is that he helped reshape readers' impressions of the publisher.

"He’s added a layer of reality and diversity to Riverdale that was never there before. And I think we’ve treated the character with respect and honesty—which is why he’s become a fan favorite and permanent fixture in Riverdale," said Parent.

Archie's Kevin Keller Series To End, But The Character's Role Will Expand

WandaVision: How Do You Cut Vibranium?

WandaVision: Does Agatha Get Her Powers From Dormammu?