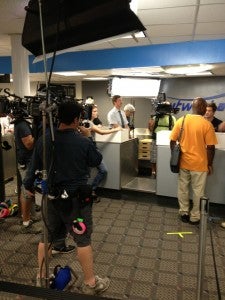 Yesterday, Jason Bateman tweeted something that fans have been waiting for since 1996: the first set photo from Arrested Development's fourth season!

The series, which stars Bateman alongside Will Arnett, Archer's Jessica Walter and Scott Pilgrim Vs. the World's Michael Cera, went back into production yesterday for the first time since it was cancelled by Fox more than half a decade ago. The ten-episode fourth season will be released simultaneously on Netflix at some point in 2013.

The photo itself doesn't say much (except that, apparently, Michael finds himself in an airport)--but let's face it: After years of rumors and false-starts, anything official gives fans something to latch onto, if it's only an assurance that the fourth season is really happening.

The shoot is expected to run through the fall, with each episode centering on one member of the Bluth family, culminating with the tenth and final episode when the nine family members come together and, probably, someone loses an arm.