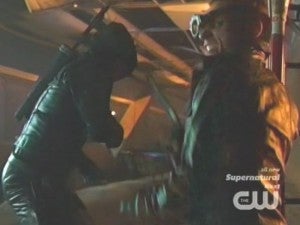 The CW released episode information for its upcoming February 27 episode, "Dead To Rights," revealing that DC Entertainment Chief Creative Officer Geoff Johns will return to script the episode, and that Deadshot, the first "supervillain" to have appeared on the show, will also return for the episode. Here's the summary of the episode, via Green Arrow TV:

DEADSHOT RETURNS — Oliver (Stephen Amell) and Diggle (David Ramsey) learn that Deadshot (guest star Michael Rowe) is still alive and his next target is Malcom (John Barrowman).  Malcolm invites Tommy (Colin Donnell) to attend a benefit honoring Malcolm for his work with Starling City but Tommy refuses to attend.  Oliver encourages his friend to mend his relationship with his father while he can.  Meanwhile, Oliver struggles to balance his new relationship with McKenna (Janina Gavankar) and his duties as Arrow.  Katie Cassidy, Paul Blackthorne and Susanna Thompson also star.  Glen Winter directed the episode written by Geoff Johns (#116).

The last time Johns was aboard for an episode--"Muse of Fire," which feature the Huntress--DC promoted the episode aggressively and hyped it with interviews ahead of time that this announcement was made more quietly likely just reflects that Arrow is strong enough at this point in the season to stand on its own merits, but it could be fun to speculate that they're downplaying an important story to be sure not to blow a twist. We'll see as the episode gets closer.