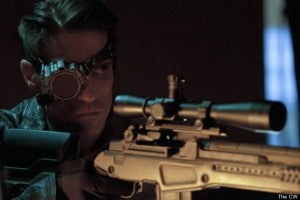 Ahead of next week, when Arrow will debut on The CW and then have a strong presence at New York Comic Con, DC Entertainment have shared a first look at Deadshot, the DC Comics villain who will be featured in the show's third episode over at The Huffington Post. The episode, titled "Lone Gunman," will debut on October 24. Floyd Lawton, better known to fans as Deadshot, will be portrayed by Michael Rowe. The character of Deadshot is best known as a member of the supervillain/anti-hero team Suicide Squad, of which he has been a member in almost every iteration. He was created by was created by Batman co-creator Bob Kane, David Vern Reed and Lew Schwartz. He's a character with a rich, tragic back story that has developed him into a fan favorite among fans of any series he appears in.

The Squad also evolved at one point before Flashpoint into the Secret Six, and supported a fan-favorite book where he co-starred alongside characters like Bane and Scandal Savage. Deadshot has also appeared in both animated form (on Justice League Unlimited and Batman: The Brave and the Bold) and live-action (on Smallville), making the character not entirely unfamiliar to TV audiences who are in the know as far as DC's previous small-screen outings. An expert archer against a gun-toting assassin who never misses seems an ideal pairing for Arrow, which has described their take on the Green Arrow mythology as inspired by sources like James Bond and Jason Bourne films.