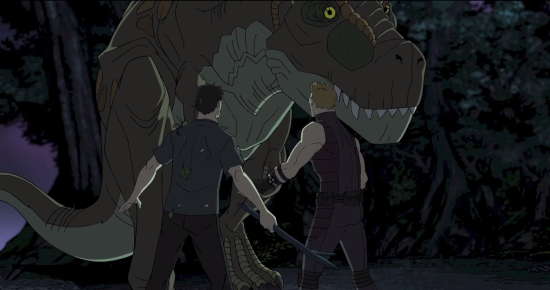 Marvel Entertainment and Disney XD have released a preview of this week's episode of Marvel's Avengers Assemble, "Savages." It's Avengers versus dinosaurs when the Avengers take a trip to the Savage Land.

BIG HEROES! BIG VILLAINS! AND BIGGER ADVENTURES…this week Share Your Universe this Sunday (8am/7c) with a brand new episode of Marvel's Avengers Assemble inside the Marvel Universe on Disney XD. Marvel's Avengers Assemble.  - "Savages" When Tony becomes too reliant on his tech, Cap challenges him to go without it for one full day. Not only is the challenge accepted but is made far more complicated when Tony takes them to the Savage Land where they stumble upon Justin Hammer who they'll have to battle completely tech-free!