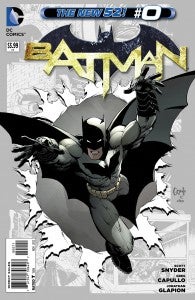 Scott Snyder, the writer on Batman and reportedly the writer of an as-yet-unannounced Superman: The Man of Steel series with Justice League artist Jim Lee in 2013, apparently got a lot of questions about whether that and other rumored projects on his plate might steal him away from his fan-favorite run on Batman soon. And so he took to his Twitter feed just now to let fans know not to fear. "Got a lot of questions at baltimorecomics(and getting them here) about what upcoming projects I have in 2013, creator-owned & DCU," tweetedthe writer. "...About what they are, but also about whether they will cause me to stop writing Batman. "So I just wanted to be 100% clear on that point: NOTHING I have coming up, in any realm, will interfere with GregCapullo's and my BATMAN run. We're completely committed to Gotham for a long time (if you guys'll allow us to stay:)). We already have stories planned through the end of 2013." That's probably not all that surprising--given the popularity of the series, it seems unlikely the team will be forced off anytime soon, and we know that it'll be something like March before the Joker story Death of the Family and its fallout is resolved. Still, it's good to know that Snyder is working ahead. In addition to the rumored Superman book, he has been pretty open about wanting to do more creator-owned work (in addition to his current co-creation with Raphael Albuquerque, American Vampire), so knowing that he's working way ahead on Batman is likely the best way to know the there'll be no problems, no fill-ins, no missed deadlines in the near future.

Batman Planned Out Through 2013 For Snyder and Capullo