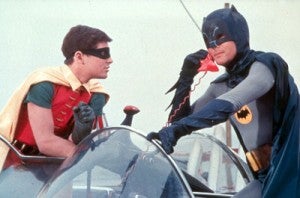 Following an announcement over the summer at a Las Vegas Licensing Expo that Mattel had acquired the rights to the 1966 Batman TV series, the latest issue of License! Global confirms reports that the first merchandise will hit in 2013.

"The 1960's Classic Batman TV Series line, which will be released next year, is based on the original television series starring Adam West and Burt Ward," the magazine reported yesterday.

"We are brand builders at retail and, in partnership with global partners like Mattel, we are able to create product lines that connect with the consumer," explained Karen McTier, executive vice president, Warner Bothers Consumer Products. "Of course we leverage the content created by the studio, but it is critical to maintain our momentum in the absence of that content–ultimately creating an ongoing opportunity for retailers around the world. In order to do this, we are often developing toy lines that are independent of an animated series or tentpole film, but tell a story through the medium of play."

Batman aired on ABC between 1966 and 1968 and featured recurring characters played by the likes of Burgess Meredith, Cesar Romero, Julie Newmar and Eartha Kitt.

Long-standing rights issues have prevented home video or other merchandise being released based on the series, and the Mattel announcement this summer prompted many fans to wonder whether a video release for the show might finally be in the offing. The exact nature of the rights problems is unclear, such that a cash infusion from Warner Brothers would probably be needed to clear all rights from a number of parties before they were comfortable with a home video release.

The article also revealed that Mattel will continue its relationship with DC's collectible figures and their Super Friends lines, as well as launching toys based on the upcoming animated series Beware the Batman.