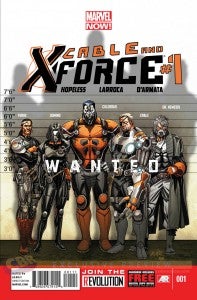 Besides seeming to confirm rumors that Kick-Ass 2 director Jeff Wadlow will be the man to take X-Force to the big screen, Fox exec and longtime comics writer Mark Millar told Collider last weekend at San Diego Comic Con International that the studio is looking to make a number of franchises and ultimately build to something big that he can't yet talk about. You can see the full interview below.

"It's so hard because I can't really say what it is, but it's building up toward something I'm sort of working on," Millar said of his role with Fox. "I'm talking to some people, bringing in some people. Brought in Jeff [Wadlow]; I really wanted Jeff after he'd done such an amazing job on Kick-Ass 2. I said to the Fox guys, 'Look, this guy's going to blow up. He's going to become massive after Kick-Ass 2. Get him now because Warner Bros. or Sony or somebody's going to come in with a great offer for him.'...So he's been brought in now, you know, and there's a few other directors I'm talking to as well."

When the interviewer pointed out that the depth of the X-Men character library is such that Fox could essentially "make their own Avengers movie," Millar agreed, saying that reality is not lost on him or his bosses.

"They're aware of that. At the moment though you've got to be smart about that. You've got to grow it organically," Millar said, echoing sentiments he'd communicated about the Justice League movie months ago. "We're not talking crossovers or anything just yet; the idea is to build it quietly in its own way and bring in the best possible talent but you're right; Marvel sold the X-Men franchises back in the '90s when they needed the cash but you have to remember they were the crown jewels. The reason they got snapped up is that they were Marvel's best-selling book really for twenty years. So we're sitting on gold right now. Very vaguely, we are talking about lots of possibilities but I think there's a good five to ten golden franchises in there."