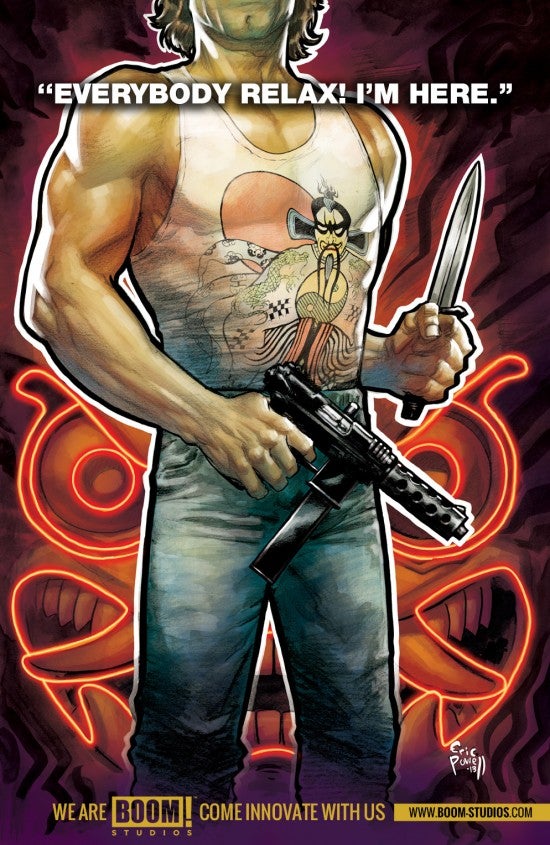 It looks like Boom! Studios and The Goon creator Eric Powell are in big trouble. Boom! Studios have just released a visual teaser which, without actually using the title seemingly announces a Big Trouble in Little China comic book. Featuring the familiar caption "Everybody relax! I'm here" and an unmistakable image of Kurt Russell's truck driver character Jack Burton drawn by Powell, the image leaves little to the imagination--other than perhaps the question of whether their Big Trouble will be ongoing, a one-shot or miniseries. The John Carpenter-directed 1986 martial arts movie has remained a cult-favorite since its release, in spite of  mixed reviews and poor box office performance when it was initially released. In the time since, home video and merchandising have made it a profitable franchise several times over. This will be the first time a comic book is released based on the property, although Top Cow Productions did annnounce one by Evan Bleiweiss and Jason Badower at 2009's San Diego Comic Con International. The project never moved forward, and it appears as though the rights have lapsed. The film was distributed by 20th Century Fox, with whom Boom! signed a sweeping, first-of-its-kind first-look agreement in 2013 giving the studio unprecedented access to Boom! Studios properties and Boom! access to Fox's decades-old catalog of movies.

Big Trouble in Little China Comics Coming From Boom! Studios and Eric Powell? Looks Like It