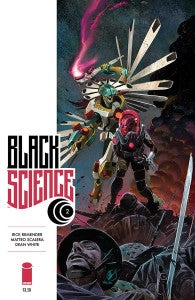 Image Comics have announced that both Black Science and Manifest Destiny have sold out their second issues at Diamond Comics Distributors and will return to print to meet customer demand.

Black Science, created by Rick Remender and Matteo Scalera, has already garnered critical acclaim and its first issue instantly sold out on the day of the release. The speed and action picks up when the group realizes that the likelihood of returning home might be jeopardized… by someone among their group. A new group leader is appointed and more information on their perilous journey is revealed.

In Manifest Destiny, Lewis and Clark adventure into the unknown, in an America where monsters and mysterious creatures roam freely, picks up with the crew discovering something even more frightening than a… well, Buffalotaur. 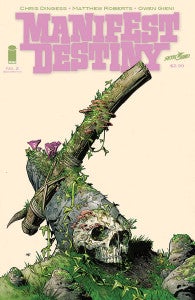 Both titles have completely sold out at the distributor level, but may still be available in comic stores, and is currently available digitally on the Image Comics website and the official Image Comics iOS app, as well as on Comixology on the web, iOS, Android, and Google Play.