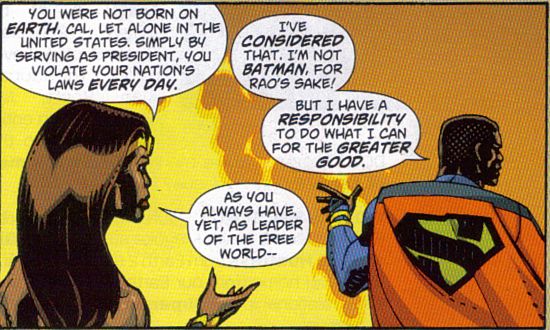 Action Comics #9 features the new DC Universe premiere of the black Superman of Earth 23. Not only is Superman black in this alternate Earth story, but he is also President of the United States of America. While the first thought that might cross your mind when you hear black Superman is that it's just a gimmick to sell more comic books, but Action Comics #9 is actually a really well-written comic book with some very interesting story angles. The main story is written by Grant Morrison, and it actually pokes at a topic near and dear to the hearts of many in the comic book industry. In the story, Lois Lane, Clark Kent, and Jimmy Olsen (from yet another alternate Earth) come up with an invention capable of creating a Superman entity. They sell off their creation to a corporation that turns their Superman concept into a global marketing brand. The story very much mirrors how many early comic book artists and writers lost control of their creations. The back-up story by Sholly Fisch is just as powerful as the main story. Instead of glossing over the potential ethical dilemmas of a Superman as President, it deals with them head on. The main focus of the story revolves around how a Superman as President would deal with such issues as a foreign power developing a nuclear program. In one scene that calls out to the Obama birther controversy, Wonder Woman lectures Superman by saying, "You were not born on Earth, Cal. Let alone in the United States. Simply by serving as President, you violate your nation's laws every day." Some very powerful issues were addressed in what is perhaps one of the best issues of Action Comics to date in the new DC Universe. Many of these topics are creating quite a bit of debate among comic book fans, which is often what the best comic books do.

Peacemaker Just Name-Dropped One of DC's Most Bizarre Superheroes