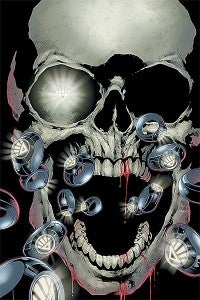 Thank you, Blackest Night #1, for wiping the slate clean, for me at least, after the mess that was Final Crisis. After not really caring all that much about New Gods, Black Racer, Furies and someone named Libra who hadn't mattered in years, not to mention feeling that the entire thing could have been told in three issues, max, DC has brought us a true limited series with this first issue of what promises to be an emotionally compelling and action oriented story, Blackest Night. It hasn't been easy for the Green Lanterns lately, or the Guardians for that matter. With the Sinestro Corps War, Alpha Lanterns and the emergence of the various other Lanterns involved in a War of Light, they've had their hands full while simultaneously having to handle the rules of the game changing very quickly. At the center of all this, and the narrative frame for issue one of Blackest Night, Hal Jordan stands ready to lead the Green Lanterns in a new direction and towards a better world. Writer Geoff Johns takes great pains to build a story that allows Hal to lead us through the state of the DC universe as it stands, and the use of a national day of remembrance of fallen heroes, celebrated on the anniversary each year of when Superman "died", provides a perfect framework to allow that rumination on life, death and superheroes to happen. The reader gets to see various figures highlighted, from the original Firestorm, to Aquaman, to the Freedom Fighters, and even members of Flash's Rogues, each opportunity providing us a chance to hear how the costumed heroes left to carry on are still coping with these recent and long-passed deaths. It can be emotionally dense at times, especially when discussing all that Earth's Green Lanterns have lost, but it makes perfect sense as a set up for the events later in the issue. Barry Allen's return as the Flash has added resonance here, as he is confronted, willingly, by everyone the DC community has lost since Barry "died" in the events of Crisis on Infinite Earths. There are several scenes, wonderfully illustrated by Ivan Reis, that show the personalities of several of these fallen characters, and Barry's reaction to them, bringing the gravity of the issue home. Not all is tenderness and sweet melodies, as a massive swarm of black power rings find their way to their deceased owners. Many prominent, and some surprising, names receive the powers of the Black Lanterns, led by their new leader Black Hand. An assault like no other appears to be brewing in the last quarter of this issue, as dead friends and foes begin to wreak havoc on the living, draining them of life in the process. The issue ends with a shocking couple of deaths at the hands of perhaps an even more shocking pair of Black Lanterns, setting up an already anticipated second issue. What makes this first issue work so well is the fact that we get payoff right away. The first issue is not solely exposition, mainly because we've known what's been coming for so long now that any further delay would have felt redundant and cheap. Even I will admit that the first issue of Final Crisis had me hooked, but I quickly found myself losing interest after that, the story's point and purpose appearing to be buried under too many other details. Blackest Night, I anticipate and hope, will not suffer from the same issues. It's truly an event, one that will reach into the recesses of most of the DCU. Final Crisis never seemed to do that. It felt too contained, too relegated to the action in the limited series, save for the deaths of Martian Manhunter and Batman. It's guaranteed that Blackest Night will strike emotional hammers upon the hero and villain communities, as evidenced by this hard-hitting first issue and the promise of tie-in books. As Geoff Johns and Ivan Reis are masterfully showing us and the DCU, sometimes you have to confront those things, and people, thought dead, thought finished, and thought complete.