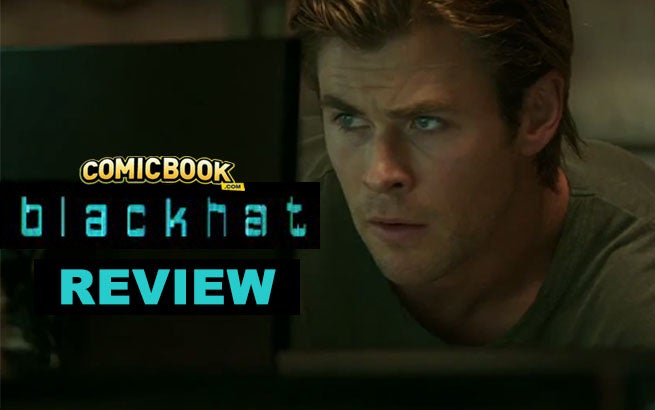 Blackhat. It starts off with one of the most unique opening credit sequences I’ve ever seen that finds a way to combine graphics and music to make computers, wires, and software have these angry, intimidating emotions.

Right away, we witness a disaster in China caused by a hacker who attacks a nuclear reactors cooling pumps. Then we’re taken to prison, where we meet Nick Hathaway (Chris Hemsworth), who right off the bat charms the audience with his fun disrespect for authority. Then, we’re back to China, with not much time to get attached (we travel a lot). Chen Dawai (Leehom Wang) is given the task of finding out who is behind this nonpolitical, seemingly random and solely malicious attack.

Dawai, and his sister, Wei Tang (Lien Chen), head to the U.S. with a plan to convince the stateside powers that be to release Hathaway from prison because he is the only hacker in the world capable of finding the culprit of the Chinese attack. Hathaway is released on the condition that if he finds the hacker he’ll be a free man, but if not, it’s back to the slammer. Revenge and love are only a couple reasons added to Hathaway’s list of motivation to succeed.

All of these things take place over the first hour (maybe more) of the film. Needless to say, it moves slowly. During this time, though, we get a bit of the action moviegoers have grown accustomed to with bullets and explosions, but director Michael Mann manages to create a couple of intense scenes that don’t involve any of those, but rather confrontations through computer screens.

The cap of the second act packed one of the most shocking scenes I have ever seen in a movie. The entire theatre gave a collective number of gasps like nothing I’ve ever heard in a movie theatre. Here, I thought the movie would pick up and keep moving with mind-blowing moments and finish similar to this scene- but it didn’t.

For some reason, minor details that usually wouldn’t bother me piled up enough to get me to notice. Without spoiling anything, there’s a scene where Hathaway and Tang are hiding out in a small village without packing anything in advance, and the next day, Tang has a beautiful, clean white dress and heels for a plan the two devised. Then, there’s also the fact that people can get stabbed in the head with a screwdriver in the middle of an enormous elbow-room only crowd and warrant no reaction is if it were a common occurrence. And I know we have Hemsworth in the role, but briefly given his non-military background, you would have to think Ra’s Al Guhl was in the prison training him to fight.

I enjoyed watching Hemsworth and Chen’s chemistry on screen. They made their sudden relationship believable, especially Chen. But does Hemsworth's build, charm, and sexual prowess match what is in your mind's eye of a computer hacker? Probably not, but Hemsworth still breathes enough life into Hathaway to keep us watching. I picture something closer to Jake Gyllenhaal's character from Nightcrawler, which would have actually carried this movie a whole lot further.

Viola Davis brought a lot to the film, which gives me hope for her future as Amanda Waller with Suicide Squad. Davis played Carol Barrett, a brash police officer with baggage. Her character opens up throughout the film and in my opinion had to most development while providing us with a bit of comedic relief, although I’m not sure all of it was on purpose.

Are you checking out Blackhat this weekend?