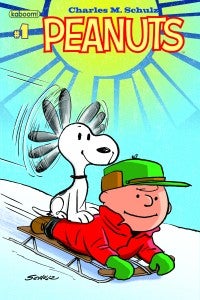 Charles M. Schulz's Peanuts, one of the longest-running and most beloved comic strips of all time, will be coming to Boom! Studios as an ongoing, monthly comic starting in January. The series will feature covers and reprinted strips by Schulz alongside new, original content by creators Vicki Scott, Paige Braddock, Shane Houghton and Matt Whitlock.

“The Peanuts graphic novel, Happiness is a Warm Blanket, Charlie Brown, was an event here at KABOOM! this past spring. We can't wait to see that excitement continue with a newPeanuts monthly comic series,” BOOM! Studios Founder and Chief Executive Officer Ross Richie said. “Charles Schulz is truly one of the great creators of our time and we're honored to be carrying on his legacy while bringing his work to new generations.”

Last week, Boom! released Peanuts #0, which is available at comic stores now for $1. Peanuts #1 will be released in January 2012.