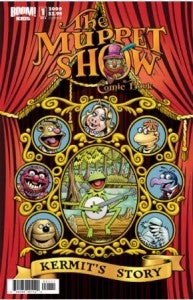 One thing becomes readily apparent upon meeting Boom! Studios CEO and co-owner Ross Richie: the man knows, and LOVES, comic books. As soon as we sit down for this interview, Richie eagerly digs through a stack of back issues in front of me, gushing over the names of artists and writers from years past such as Buscema, Kirby and Byrne. He knows them by cover and title only, able to spin comic book history quickly from his mind. His enthusiasm and skill in comic books has served him well as Boom! Studios CEO, helping to guide the company into being one of the most dynamic and risk-taking around. He credits a lot of that success to the people he has brought into the company and the material that Boom! deals with. Richie said that Boom! is unique due to their being, "a specialized company that focuses on doing a set number of titles at a high level of quality, such as our kids line that includes The Incredibles, The Muppet Show, Toy Story, and our more mature titles like the Cthulhu books and Zombie Tales (the book that got Boom! started)." Getting to this level of success was difficult at first, with Richie stating that their fourth anniversary, coming in July, has been a result of the talent the company has drawn. "Zombie Tales had stories by Mark Waid in it and a cover from Dave Johnson with a story by Keith Giffen and one drawn by Keith Giffen," said Richie. He credits those early creative relationships with people paying attention to the quality of Boom!'s books, which then led to the creation of Hero Squared. The line has been growing ever since, and has begun to produce the vast range of titles previously mentioned. One of Boom!'s most recent releases, The Muppet Show, has garnered a lot of interest and attention, something that Richie felt was due to a combination of key factors, "Roger Langridge is an incredibly talented comic book cartoonist and writer. I think people are reacting to someone (Langridge) who understands the core property of The Muppet Show, and it's been presented in a way that really creatively delivers to people who may have been skeptical at first but who are finding a quality book of this series." Fan reaction to the series, and other titles from Boom!'s younger imprint Boom! Kids has been especially positive, with Richie explaining that, "there are a lot of parents in their twenties, thirties and forties that wish there was material for their kids to read. They're excited to buy a book 'for their kids'", he added jokingly, "that they read, then pass on to their kids who read it four or five times and they love it. We hear from readers about how excited they were to buy these books and then share them with their kids." Richie was equally positive about the upcoming title Poe, a comic book series focusing on the detective skills of American literary icon Edgar Allen Poe, intended for more mature readers of the company's work. "Jack Mitchell (credited in the book as J. Barton Mitchell) submitted the idea for this book to us, and it was just a great concept. We're really tipping our hat with this series to the grand master of action, horror and adventure, Edgar Allen Poe. Our managing editor, Matt Gagnon, put together a great creative team for this series, and I think it's one of the best things we've ever published." Shipping in July, just in time for some summer reading, all early reviews and press about the project has been overwhelmingly positive. The future looks bright for Boom!, with other projects in the works such as the release of The Anchor in October. Richie described The Anchor, saying it's, "The story of God's own holy warrior who fights on the side of the angels. God's own leg-breaker, if you will. He looks like an old sailor; he's not afraid to fight. It's got a great tongue-in-cheek sensibility about it, and he exists on the fringe between Heaven and Hell, fighting demons who are trying to win the ongoing battle. It's got a very Hellboy/Goon air to it." It's certain that Boom! will continue to steer a clear course of their own making, and with books such as The Unknown, Irredeemable, and of course The Muppet Show already making waves, fans and new readers are certain to encounter creativity and originality, all of which are certain to establish Boom! in the minds of other comic book fans for years to come.

League of Legends Devs Plan to Cut Back on "Systemic Mobility"

WWE Has Reportedly Picked a Date for Live Fans to Return

The Mortal Kombat Reboot Should Lead to a Street Fighter Reboot