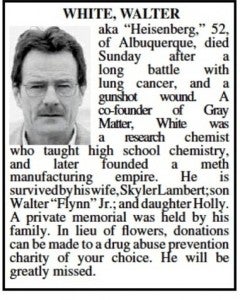 It's the first time that the obituaries probably should have included a spoiler warning. If you subscribe to the Albuquerque Journal, then you might have noticed a famous name among the obituaries. In this mornings edition of the Albuquerque Journal, an obituary for Walter White reads "aka 'Heisenberg,' 52, of Albuquerque, died Sunday after a long battle with lung cancer, and a gunshot wound. A co-founder of Gray Matter, White was a research chemist who taught high school chemistry and later founded a meth manufacturing empire. He is survived by his wife, Skyler Lambert; son Walter "Flynn" Jr.; and daughter Holly. A private memorial was held by his family. In lieu of flowers, donations can be made to a drug abuse prevention charity of your choice. He will be greatly missed." No, there doesn't happen to be a real Walter White, who lived a similar life and died a similar death to the TV Walter White. It turns out a group of Breaking Bad fans, who are members of the Facebook group "Unofficial Breaking Bad Fan Tour" took out a paid ad in order to place an obituary for White in the Albuquerque Journal.