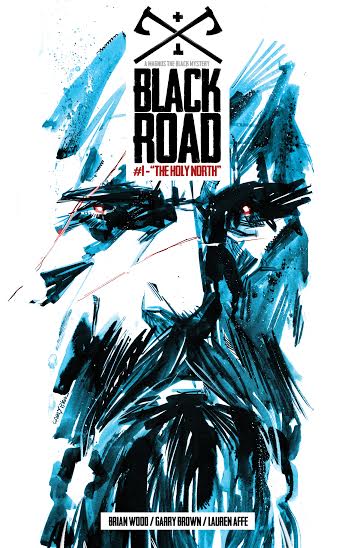 I sat down with Brian and Garry get the inside scoop on what Black Road is all about:

Brian, give us a glimpse into the the world of Black Road. What's the culture and politics of the setting like, and what is Magnus the Black's relationship to it.

Brian Wood: Well, the setting is a version of historical Viking Age Norway. Its not as historically accurate as Northlanders, but its close.  There is really only two major deviations from history: the first is the Black Road itself, which is a main road or path running the length of the land heading north.  It's a dangerous road, the site of many crimes and other nefarious goings-on.  The second deviation is something of a spoiler so I won't get into too much detail, but it involves the extent to which the Church was involved in the pagan lands at the time.  That aside, its the cultural crossroads and the turning point in history that attracts me to this era and this place in the world, just as it did with Northlanders.  I don't ever seem to get tired of thinking about it, and writing about it.

Magnus The Black is a fixer for the Church.  He's a Viking, a born pagan, but there's something about this clash of cultures that compels him to step in and work for both sides, to help smooth the impending transition from paganism to Christianity for the sake of peace.  But what that means for him in the immediate term is he's mistrusted by both sides... no one knows where his loyalties lie.  He's sort of a mess.  he sleeps outdoors, he's always paying for things on credit, and probably stinks really, really bad.  But he's also really good at his job.

The first story is about Magnus taking on a simple bodyguard gig and totally screwing it up.  Professional pride dictates he make it right, and following the path of clues leads him north to a secret site that utterly blows his mind, and signifies a near-total threat to his native culture.

What is it about the Viking era that keeps you coming back to tell more stories? What is the difference between this book and Northlanders?

BW: The main difference is Northlanders was a heavy, serious attempt at being loyal to history and to fully represent the era.  With Black Road, what we have is a story that is less about historical events and more about the mission at hand, the case that Magnus is working.  Its lighter, its funny at times, its more over the top.  And the bad guys, when we meet them, really play a little fast and loose with history.  But that's okay.  Its better to do something a little new than try and recreate Northlanders exactly.

Ideally, there will be a whole series of Black Road volumes, like you see in prose fiction.  Ian Rankin's Rebusnovels, Lee Child's Reacher, John Lawton's Troy, Martin Cruz Smith's Arkady Renko... I've been dying to write a project in that mold for YEARS, a strong character with multiple installments that span years.  That's the goal here.

Garry Brown: With the Massive and Catwoman I was mostly using brush, with a little nib here and there. For Black Road I'm doing the opposite. I'm mostly using nib with some brush. It gives the pages a rougher look which I think lends itself to the era and story we are telling. Nothing was really perfectly straight or rounded, so there's a lot of organic structure to the pages.

What materials are you using?

When you sit down with a script from Brian, what's the first part of the process for you as you start building that world on the page?

GB: I think I breakdown a script a little differently than most artists. I read it for the first time as I'm doing the layouts. that way I can get my first impressions down as I go. Also it helps with reveals or surprises as my reaction is recorded on the page.

What's the collaboration like between you two? You've been working together for a good chunk of time now. Do you have a shorthand going between you?

BW: Its pretty easy at this point.  I think Garry generally knows what a script from me is going to read like, and I know when I write pretty much what the art will look like.  This is good, we basically stay out of each other's way.  There was a learning curve with the first issue since the Viking stuff is second nature to me but new to Garry, but that got ironed out pretty fast.  One thing that is different with this compared to The Massive is that Garry co-owns this and is starting with issue #1, so all the character design is him, and he has a lot more leeway to interpret the story and scripts the way he wants to.

GB: Yeah, pretty much what he said. Haha. It's pretty relaxed. I think we are both comfortable enough to bring up things that aren't working or that we'd like to see done differently with no fear of ego.

If its possible to pinpoint any, what are some of the influences on each of you that might have found their way into this story? Any books, music, film or art that helped shape the shape, structure, or tone of the story?

BW: For me, its the prose novels I mentioned.  I'm taking equal parts that and mixing it with Northlanders and trying to really enjoy myself with the dialogue, find a sort of (Viking) gutter poetry to the way Magnus speaks.  Its been a blast.

GB: It's mostly been music for me. Lots of Scandinavian rock bands, but that's just because i like them. Not sure if it's related to the book.