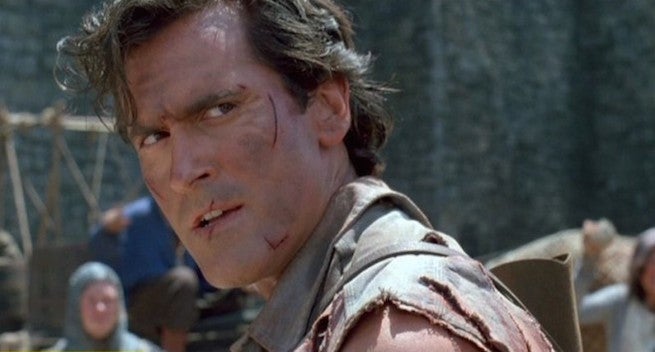 After 23 years, Bruce Campbell is returning to one of his most iconic roles, that of one-handed, chainsaw-wielding exorcist Ash in Starz new half-hour comedy series Ash vs. Evil Dead.

In an interview with Entertainment Weekly, Campbell shared what factored into reviving the franchise and what distinguishes Evil Dead from AMC hit series, The Walking Dead.

"We realized if we made another movie, frankly, it would probably be too expensive," Campbell explained. "But in the format of a TV show, we could give people exactly what they wanted and expand the character and the story even more. Ash would probably have more dialogue in one season than in three movies. He'll have to become a more fleshed-out character as well. And we never burned Evil Dead as a franchise out—it's not like we did 13 of these movies. So we felt like, what the heck, let's give it a try. Walking Dead is Walking Dead, but we were kind of first. And I would say it's about as big of a counterpart to Walking Dead as you could program, because Walking Dead is unrelentingly grim and hugely popular. We're going to give people a little of the old fashioned splatstick—horror and comedy. The fans have been really good to us over the years. This is an opportunity to do something with full street cred. [Fan reaction to last year's Evil Dead remake] was all, 'Yeah yeah, that was nice, fellas, but we still want the real deal.' This is it. Sam's back. I'm back. [Executive producer Rob Tapert's] back. Love it or hate it, this will be the real deal."

Campbell credits the popularity of The Walking Dead for helping the horror genre gain more footing in mainstream media.

"Well, The Walking Dead has been instrumental in the continual popularization of the horror genre," he said. "Horror used to be a much smaller aspect of all the different genres available. Something we're doing is taking the horror parts very seriously. We're not making fun of the horror aspects. And it's going to cause Ash—this crabby middle-aged man who doesn't want to get dragged back into this—a lot of problems. He's not the Ash he used to be."

Campbell continued, "He continues being a trash-talking know-it-all who doesn't really know anything. He's the ultimate anti-hero. He's a guy with no appreciable skills. He's not a former Navy SEAL, he's not a former CIA or FBI. He's no special anything. He's just a guy from S-Mart, you know? And think that's part of what people relate too. All these super hero movies—I rather relate to a garage mechanic who gets into a sticky situation. That's what I look forward to playing—a guy with horrible flaws. In Army of Darkness he can't memorize three words and he's responsible for the deaths of a 100 people—this is your lead character!"

10 episodes are planned for the half-hour horror comedy. Ash vs. Evil Dead is scheduled to premiere late 2015 on Starz.