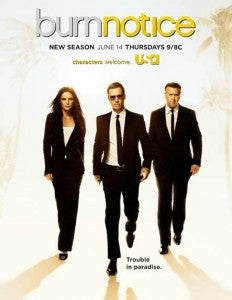 In an interview yesterday, Burn Notice star Jeffrey Donovan, who plays Michael Westen on the spy thriller, told the Associated Press that a "main, longtime character" in the series will die during the show's upcoming sixth season. "Eventually you're going to see the whole team on the run because of what the team does to avenge this person's death," the actor told the AP. The death, apparently, will happen during the course of a mission wherein the team captures a hardcore bad guy for the CIA in exchange for the freedom of Michael's girlfriend Fiona, who had to turn herself in on terrorism charges at the end of last season. The death won't come right away, becuase Donovan says that a good chunk of the season is just getting to the point where they're ready to get Fiona sprung. Who could it be? Well, there are a few candidates. As often as not, these things turn out to be code for "Michael's mother or brother," somebody who appears regularly enough to be a fan-favorite but who isn't inherent to many of the plots. This allows the show to deliver a big shock, rally the troops and save a few bucks on that person's salary, all while being able to move on next season without missing a beat because the character wasn't a necessary part of the more practical elements of the plot. Look, for instance, at what Marvel did with the big death in The Avengers. That said, this time around it seems as though the family unit is probably safe, their lives traded for Jesse Porter, Coby Bell's character on the show. He was added to the cast late but has become a major player on Michael's team in the last couple of years, which raised some red flags with fans when he did not appear on the promotional poster teasing the show's sixth season back in May.

Burn Notice: Who Will Die?