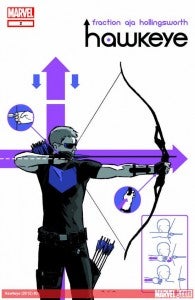 ...And then there was one. Black Widow is now the only tights-wearing member of The Avengers movie's team without a solo ongoing comic book series. After it was outed by Bleeding Cool earlier this week, this should come as no surprise to anyone reading comics news sites, but Marvel announced at their Cup o' Joe panel earlier today at the Chicago Comics and Entertainment Expo that Matt Fraction and David Aja will work together on Hawkeye, beginning in July. The first two covers are available at Marvel's website, one of which (#2, shown at right) features an archery form chart where Hawkeye is used as the model. That may be in no small part because Kate Bishop, the Hawkeye of Young Avengers, will join the book as Clint Barton's sidekick/apprentice. It's also a somewhat ironic image, as Wired recently featured a story by an archery coach who criticized actor Jeremy Renner as having terrible fundamentals. Renner appeared to address that criticism on the red carpet of the Avengers premiere in Los Angeles. He was very dismissive of his supposed archery training, saying that he took a few lessons but stopped soon when he found that it was not helping him. He also suggested that, being a superhero, fans would likely take as an article of faith that Hawkeye was a good archer, even if he didn't look it. "He's got some stuff coming up in [Avengers Vs. X-Men] and afterwards he's in a place where he's gotta figure out what he's doing with himself and why. What moves him, what's meaningful for him," writer Matt Fraction said of the series in a  press release. It's that search for a role that brings him in contact with Kate Bishop. "It's a very Avengers relationship—meaning Steed and Peel—and she's as adrift as he is," Marvel quotes Fraction. "What the hell are these two doing with their lives? Turns out, helping people is what they have to do to get through the night. In costume, in life, doesn't matter. Good guys don't punch a time card at 5:00."