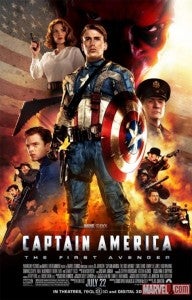 It’s less than a week before one of the most anticipated comic book movies of the summer hits theaters. After a slow start, the U.S. box office has been red hot lately with Transformers 3 and Harry Potter & The Deathly Hallows Part 2 raking in the big bucks. Will Captain America: The First Avenger continue the trend and give the giant robots and the boy wizard a run for their money?

While it's always difficult to judge a movie based on trailers and photos alone, here are five reasons that we’re very excited about Captain America: The First Avenger.

Tommy Lee Jones – From the previews so far, it looks like Tommy Lee Jones is going to provide some hilarious one-liners in the movie. The humor used in Iron Man is funny without being campy, which is perfect for a superhero movie. Tommy Lee Jones’ performance could provide a nice dose of laughs to add to the enjoyment of the film.

Chris Evans – This looks like it could be a breakout role for Chris Evans. With Fantastic Four and The Losers, he was part of a team, but with Captain America the spotlight is on him. Judging from the previews so far, it looks like Evans has risen to the occasion. Love it when the Red Skull asks what makes him so special, and he replies, “Nothing, I’m just a kid from Brooklyn.”

The Howling Commandos – Tell me you didn’t get chill bumps watching the preview where the Howling Commandos burst through a door with guns ablazing. Neal McDonough looks great as Dum Dum Dogan. Captain America: The First Avenger looks to be a movie with lots of good intense action scenes.

Hugo Weaving – Superhero movies can live or die by the performance of the villains, and all indications are that Hugo Weaving nails the role of the Red Skull. Because the Red Skull has a somewhat complicated look for a villain, it could have been a disaster in the making, but the Red Skull looks awesome.

Captain America: The First Avenger - Five Reasons To Be Excited