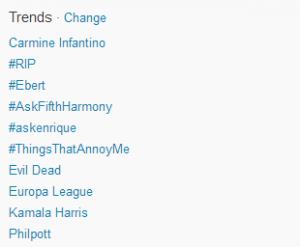 The comics community is small and close-knit, meaning that when we lose a creator, we tend to come together. That's why it's arguably not surprising--but is certainly a nice tribute to Carmine Infantino--that the legendary artist and editor is currently the top trend on Twitter, meaning that more people are discussing Infantino on the social networking site than any other single topic. Also trending: a generic "rest in peace" hashtag which could be applied both to Infantino and to Roger Ebert, the legendary film critic. News of Ebert's passing broke just minutes before word of Infantino's death became public.

Velma Showrunner Would Like to Do Harley Quinn Crossover (Exclusive)

She-Hulk: Attorney At Law Finally Gets a She-Hulk Funko Pop