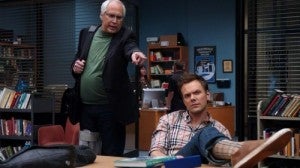 Not cool, not cool, not cool... Saturday Night Live alum Chevy Chase, who currently plays Pierce Hawthorne in NBC's cult hit Community, blasted the show in a leaked voicemail to creator Dan Harmon and reportedly told the showrunner that he is not interested in being a part of it. Because the voicemail is reportedly old, and his references don't appear to be particularly recent episodes, it's difficult to tell whether he's talking about the currently-ongoing third season or the possibility of a fourth season that, in recent weeks, has seemed more likely. This isn't the first time Chase's voicemails with Harmon have been played publicly; just last week the show creator apologized for playing a previous, expletive-filled voicemail to an audience at a stand-up comedy show he was doing in a comic book store. That time around, Chase was chastising his boss for embarrassing him in front of his family. Chase, who has a reputation as a prima donna, has been the butt of jokes on commentary tracks and in interviews since Community began, and has been less prone than the rest of the cast to make personal appearances on behalf of the show, such as the livestream panel at the Paley Festival. This time around, it seems less personal, with Chase calling Community "a mediocre sitcom" and blasting the show's editing. "There's a disconnect somewhere either between what is actually shot and the humor on the set when we shoot it," he's quoted as saying the Seattle Post-Intelligencer, who says the voicemail is about a year old. "I don't know who's doing the editing and making the choices that count the most, but I will say this: The other part of the disconnect is that obviously you don't get my humor at all." Chase's character in the show has been a controversial figure with the fans, alternating between being a feeble, pathetic racist and a genuine villain, and the end of last season left wide open whether or not he would return--although the season premiere this year brought the character back and explained that he had gotten counseling and it would all be alright. But will it?

Bryan Danielson Reveals Why He Won't Use Catchphrase in AEW