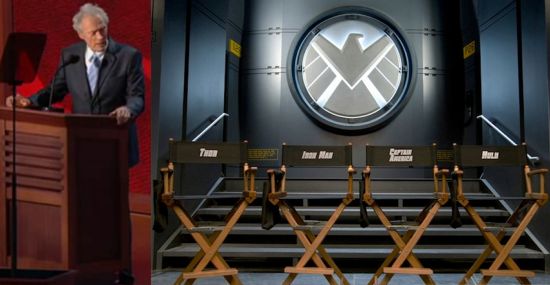 On Thursday night, Hollywood actor Clint Eastwood spoke at the 2012 Republican National Convention. In a speech that has become a viral sensation online, Eastwood carried on a conversation with an empty chair, which he appeared to believe President Barack Obama was sitting in. The speech has inspired a new Internet meme called Eastwooding, where people photograph themselves ranting at an empty chair. In that spirit, we at Comicbook.com searched through our archives, and we came across a forgotten photograph of the time that Clint Eastwood met The Avengers. We're not sure what transpired during the meeting, but we imagine the one-sided conversation went a little something like this. Eastwood: I know what you're thinking, what's an old eighty-two year old movie actor doing wanting to join The Avengers. Eastwood: I remember four years ago watching the first Iron Man movie, and I thought this was great. Here's a beautiful movie about a billionaire industrialist building weapons for America, and I cried. But then Iron Man got all soft and didn't want to build weapons no more. Eastwood: I think it's maybe time for a guy like Dirty Harry with his .44 Magnum, the most powerful handgun in the world, to join up and give The Avengers some real fire power. Eastwood: What do you mean Hulk smash?