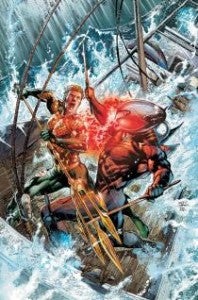 It's the last full week of June, and boy do I need a summer break!  Heroes Con was a blast and all, but it's good to be home!  I'm raring to go, so here's your weekly comic book hot list!  We have plenty of good things in store this week, from all the major publishers, so be sure to go out and get your summer reading!  Let's see what DC has to lead things off, shall we? DC Comics Aquaman #10  It's part four of "The Others", and Black Manta and Aquaman continue their hated rivalry here!  See these two classic foes clash once again! Before Watchmen: Nite Owl #1  Owl Man announces his retirement, but what else is going on here?  Find out more in this back story. Justice League #10  It's revealed here!  Who will be the Justice League's next big foe?  You'll have to pick up the issue to find out the truth! Superman #10  Superman's new villain can not only harm Superman, but she's got her sights set on Clark Kent as well! Justice League Dark #10  The House of Mystery serves as the new base for the team!  Be here for the second story of Jeff Lemire's run on the series! Teen Titans #10  Skitter's still missing.  Does Red Robin know where she is after all?  Bunker is going to try to get to the bottom of it. Savage Hawkman #10  Hey, who doesn't love a good gladiator free for all battle!  Hawkman may not if he doesn't come out on top! The Flash #10  Flash battles one of his most well-known Rogues in The Weather Wizard!  Be there for this one! Marvel Amazing Spider-Man #688  Two of Spidey's biggest foes are in this one, as Morbius the Living Vampire seeks to cure The Lizard!  Easy, right? Hit-Girl #1  Spinning out of the pages of Kick-Ass is one of the breakout stars of the series, the pint-size vigilante Hit-Girl! X-Men Legacy #269  Ding, ding, ding!!  It's an epic rematch here, as Rogue takes on Ms. Marvel!  Lot's of history behind these two! Wolverine and the X-Men #12  Kid Gladiator decides to take matters into his own hands when he takes on the Avengers all on his own. Spider-Men #2  The crossover continues here, as Peter and Miles continue to explore the link between them. Incredible Hulk #10  So now Hulk is the one in control, as Bruce Banner has gone all psychotic!  Can Hulk stay in control to keep Banner at bay?  Yep, you read that correctly. FF #19  The kids are off to Africa, Wakanda specifically.  Hijinks, and perhaps danger, follow. Dark Horse Angel & Faith #11  Angel returns to LA in this issue, which kicks off a new arc when more visitors show up on Angel and Faith's door! Mind Mgmt #2  The story of a spy unit consisting of psychics continues here, and more players and sides emerge in the drama. Resident Alien #2  A stranded alien hoping to lay low in a small town as a doctor starts to find police work intriguing, but how long can he stay hidden? Fatima: The Blood Spinners #1  Geez, don't do drugs, kids, as this story talks about the effects of a drug turning people into zombies! Image Comics Savage Dragon #180  The finale to the alien invasion story is here!  Battles beyond battles and you'll just have to see if there's anything left to salvage! Fatale #6  The second arc of the series begins here, so pick up this Brubaker and Sean Phillips' series about noir in 70's LA Mind the Gap #2  The first issue ended on three cliffhangers, so you KNOW you have to pick up issue two right??? Prophet #26  The Earth Empire is alive and awake, and now someone must get the news to John Prophet. Boom Studios Elric: The Balance Lost 11 and 12  It's a twofer this week!  Get both of the last issues of this year-long, multiverse fantasy series! The Hypernaturals #1  In a future where humanity has colonized other planets, a team of super-powered peacekeepers, the Hypernaturals, must save another group of Hypernaturals.  Be here for the start of an exciting new Boom series! Exile on the Planet of the Apes #4  The last issue is here, and the battle has been building, so don't miss the conclusion here! Top Cow Witchblade #157  A new arc, "Portals", begins here, and the hit series continues to spin out new surprises for the bearer of the blade! Magdelena TPB Vol 2  Speaking of Witchblade, she guests in this collection that gives you the latest arc in another strong Top Cow series. The Darkness Compendium Vol 2  Holy cow!  At over 1200 pages, you should have plenty of reading about Jackie and the Darkness!!

Zoe Saldana Reacts to First Avatar: The Way of Water Screening: "I Was, Like, Sobbing"