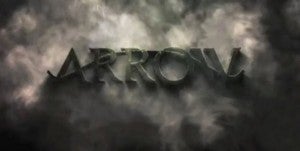 Following the first screenings of the show's pilot at San Diego Comic-Con Internaional, the CW's Arrow, the Stephen Amell vehicle, has released an official clip along with a new TV spot.

While Oliver Queen might return from the island to declare a war on crime, apparently he's not without opponents who going to be pretty ineterested in getting rid of the billionaire playboy.  Here, he finds himself tied to a chair and being tortured before he goes a little Scarlett Johansson on his attackers.