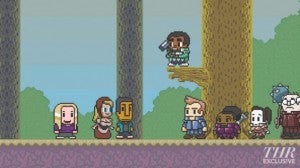 We're sorry, Jeff Winger, but your dean is in another castle. While the over-arching story of the Greendale Seven's search for Dean Pelton will undoubtedly provide the backdrop for the series finale, The Hollywood Reporter has images from at least one of tomorrow's three new Community episodes that depict the study group as a 8-bit avatars, saying that in a quest to save Pierce's fortune from his late father's conniving business partner (played by Giancarlo Esposito of Breaking Bad fame), they'll have to play through a Nintendo-style game. The episode--titled "Digital Estate Planning"--will be the second third time that the 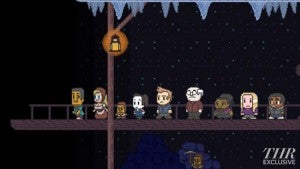 everyone's favorite Human Beings have been animated on the show--once as a vanity project by the dean, and then again in last year's Christmas episode, which featured claymation-style representations of the study group searching for the meaning of Christmas (all they found was the first season of Lost). The new episodes begin tomorrow at 8 p.m. and then resume at 9 p.m. after taking a break to allow for the season finale of 30 Rock. The new season of Community will start in the fall, with the show moving to Fridays before Grimm.