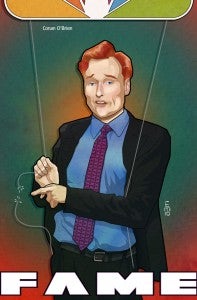 Finally, Bluewater Productions hits a home run BEFORE a title hits the comic book shops. 'Fame: Conan O'Brien' is such a natural for the biographical comic book series that I'm surprised it wasn't one of the first titles Bluewater published.

Think about it: we're talking about a guy, Conan, who has a HUGE, cult-like following. He's written for 'The Simpsons' and he hosted 'The Tonight Show'. He's a character within a character, and his story is an easy tale to be told via a graphic medium.

Like other Bluewater titles, the O'Brien story promises to hit on the highs and the lows of the subject matter. Says Publisher Darren G. Davis, "Our goal is to show the little-known events and influences that resulted in Conan O'Brien becoming the superstar he is today, almost two decades after bursting on the national scene."

Conan O'Brien Gets His Own Comic Book