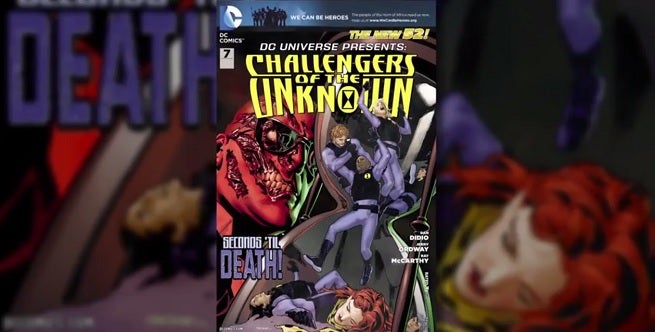 In a new DC All Access video interview, DC Co-Publisher Dan DiDio teased that elements of Convergence have been seeded as early as the first year of the New 52, when a Challengers of the Unknown story DiDio wrote with artist Jerry Ordway reportedly made reference to events that will play out in this spring's crossover. 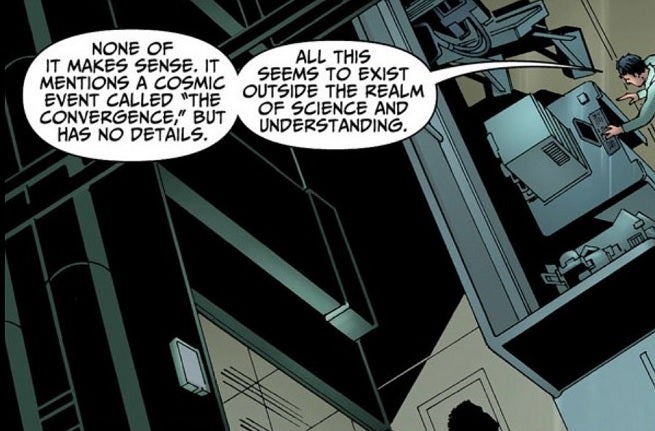 He's right, of course: there's an explicit reference to a cosmic event called "The Convergence" (seen at right) and, like Convergence, the story did feature a powerful villain who lives in "lands that exist between the beats of a heart."

Of course, in the case of Convergence, it's a villain who is collecting cities from such worlds and gathering them for a purpose as-yet-unknown.

"Those forty cities come from what we call doomed worlds and timelines from throughout DC's lore," DiDio said in the video embedded below. "One of the things that happened with the New 52 is that when we launched the New 52 and we had the Flashpoint story that got us there, the stories that were taking place in the regular books ended rather abruptly and I think that's where some of the concern comes from [with] fans, is that they didn't get that sense of closure that they did when you had Zero Hour or you'd get that sense of closure from Crisis. It left people wanting."

He added, "The tagline of our story is, 'Where do worlds go when they die?' But it's a lot more than that. It's about examining heroism."

All month long, we've been gradually revealing the many surprising, exciting and just plain awesome comic miniseries that will be a part of Convergence, 2015's massive DC Comics publishing event. Now, in this exclusive DC All Access clip, DC Entertainment Co-Publisher Dan DiDio fills in the missing pieces. Where did the idea of Convergence come from? What can fans expect? And what will the DC Universe look like when it's through. Answers...and a few more questions...await!

Convergence Was Teased in the First Year of the New 52, Says DiDio