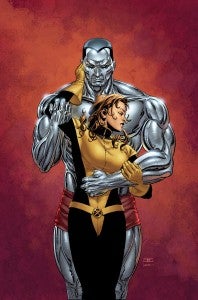 In a specially held panel at this year's Heroes Con, down in Charlotte, North Carolina if you didn't know, multiple award winning colorist Laura Martin sat down to not only discuss the work and craft of coloring for comic books, but she took it a step further by offering a live demonstration of her work.  The panel was moderated by colorist Val Staples, and a sizable crowd was in attendance, eager to hear Martin talk about her method, the trickiest parts of being a colorist, and offering an inside look at just how exactly the role of the colorist can be very complex.

Those wondering if they have perhaps seen Martin's work need look no further than the current mega event from Marvel Avengers vs. X-Men.  Martin has often had a hand in many comic book events, with her work appearing in the recent stories Siege and Secret Invasion.  Staples told the crowd that he was currently working on the Scott Snyder-penned Swamp Thing.  Things got started quickly with Martin talking a bit about just how she ended up in the field of coloring. While majoring in graphic design at the University of Central Florida, Martin told the crowd gathered that she "rediscovered comics in college," having given them up some time before shortly after middle school.  "It was then I realized," said Martin, "that people actually got paid to do comics, which I hadn't thought of before."  After crafting her senior project around comics, Martin took the advice of a friend and sent her work to Wildstorm, who hired her and where she would work for six years.  Since then, she has been a prominent colorist for Marvel, DC and CrossGen, but she has been mainly a freelance artist since 2004.

Staples started late in the 90's, attending college for art but finding that a lot of the work he wanted to do he taught himself to do.  He is also a freelance artist, after doing work for Chaos Comics and Marvel for some time.  Commenting on the nature of freelance work being so common now,  Martin said "There aren't really any color houses anymore, so the experience of working in a group like that doesn't exist anymore." There were some technical difficulties to start with, so a Q and A was held, with several aspiring colorists asking questions about software techniques, breaking into the industry, how to fix issues between screen appearance vs. print and so many others.

An audience member asked a good question about the process of coloring itself.  "Most of the art is still drawn by hand," said Martin.  "It gets scanned in, lettering is done at the same time as coloring by two different people.  We're at the end of the line, we do our work after writer has done theirs.  We find we have limited time to do our work. It becomes fun there.  Whoever scans the paper sends them to us, and they are usually 300-400 BPI.  Basic colors are laid in first by shape, arms, hair, body, uniforms, etc.  It initially looks like a basic old school comic."  Martin went on to say, to the surprise of many, that this initial stage that many colorists have started subcontracting out to other artists because it is such a basic stage.

From there, the "flats" as they are known, come back. "The base colors will help set the tone for the page.  if it's a gritty tone it will get that accordingly.  The rendering stage is where the tones and shades get done, as well as special effects such as shading and tones, etc.," said Martin.  "Rendering is also the stage where decisions about style are done.  Do we do it graphically? Realisitically? How do I approach this so that colors don't overwhelm the pencil/inking?  From there I make a low res jpeg and send it to the writer, artist, etc. and editor.  The editor emails it back with suggestions or corrections. Sometimes details are simple, you missed Captain America's belt, or there could be more detailed critiques of the effects of a color from the artist and their vision.  Rendering takes about 3 hours a page, give or take.  On Secret Invasion it took 10-12 hours a page to do with all the detail and the Skrulls and such."

Another question was has the move to digital comics changed the work of coloring?  Staples said, "If it's digital only, you have more options, but we can't do something specifically for digital with so many comics still in print form.  I've never had a chance to do digital only"  Martin chimed in with that in agreement as well, "The work looks great on an ipad, as the color calibration is very good with those, but sometimes it's hard to tell the difference in certain tones between how it looks on a computer and how it looks on another medium."

A follow-up to the discussion of differences in perception of color came up, specifically if it was difficult as a colorist doing reprints of classic comics.    "It's very hard to mimic the work of a classic comic, especially when it comes to the differences in paper.  A lot of the older comics are printed on paper that has a yellowish tint to it, versus the stark, sterile white of today.  There's going to be some difference, no matter how hard the colorist tries, in copying the work of someone, especially someone you may have respected professionally and personally," said Martin, "The orignial work is still there, so you don't have to do either or when it comes to reprints if you're unhappy with the way a reprint looks."

Do you have to have a degree, one participant asked.   Martin responded "No, lots of artists and colorists don't have a degree, but taking art classes is a strong suggestion.  Take painting classes, classes on anatomy and technique.  They are vital to do this, I think.  School does help in some cases, because you learn software like photoshop.  I got to walk in and have a basic understanding of the essentials needed to do this job and to do it at a certain level.  It can make a difference to just have even some education in the filed under your belt."  As a fun next question, Martin said that one of her favorite characters to color was Thor.  "I've always loved doing Thor, and I always love working with an artist I've never worked with before.  I got so excited to work with artists like John Romita, Jr. and Adam Kubert.  I love that new experience.

Sadly, the technology didn't pay off in the end, due to some glitches in hardware at the convention center, not in any way due to Martin or Staples. The attendees had an interesting time with these two colorists, and in a sense, the veil behind the process was lifted enough to cultivate an appreciation for what these artists do for hours a day.