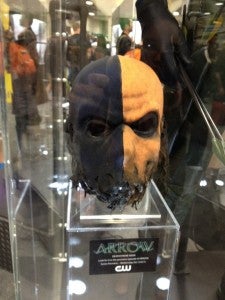 Deadshot, best known as a member of the Suicide Squad and the Secret Six in the DC Comics source material, will appear in the third episode of the forthcoming CW series Arrow, according to KSite, who cite network sources. The report was almost immediately confirmed via Twitter by series star Stephen Amell, who said, "He's in trouble." Deadshot, a sniper, seems like a perfect fit as a foil for the Emerald Archer and had long been rumored as a character with potential to appear on Arrow. He first appeared as a villain in a 1950s Batman comic but rose to fame among comic book fans during the John Ostrander/Tom Mandrake run on Suicide Squad in the 1980s. He was most recently seen teaming with a number of other villains, including The Dark Knight Rises' Bane and Talia al Ghul, in Gail Simone's fan-favorite Secret Six. A "dead shot with a sniper rifle" had previously been teased for the series' third episode, titled "Lone Gunmen," according to KSite. While the character appeared as a reinvented and more real-world-friendly version of himself in Smallville, it seems likely we might get an actual, masked villain in Arrow, which already has shown that it will feature a masked version of the classic DC villain Deathstroke the Terminator. The mask, seen briefly in a teaser for the show, was on display at San Diego Comic-Con International earlier this month, as you can see from the photo at left. No casting details are yet known for the role, which should shoot soon if it hasn't already and will theoretically air on October 24.